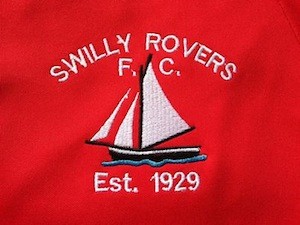 USL: SWILLY WIN BATTLE OF THE ROVERS TO LIFT THE KNOCKALLA CARVANS CUP

Drumkeen took all three points in this encounter with Swilly at St Patricks Park on Saturday. The home team took the lead on twenty eight minutes with a superb goal from Sean Peoples when his long range effort from thirty five yards crept in under the cross bar giving goalkeeper Caolan Bolton no chance. Up until the goal Swilly had the lion’s share of possession without creating any real chances of note, Oisin Duffy then had a couple of wides for Swilly before Drumkeen doubled their advantage after thirty nine minutes through Peter McNamee, Lee Guthrie’s effort was saved by keeper Bolton and the ball fell to McNamee who made no mistake from two yards out. Drumkeen went in two up at half time.

Swilly nearly pulled one back right at the start of the second half but Cormac Toland saw his effort just go past the post. Drumkeen played much better in second half but Swilly were still in the game and had a Shaun Crossan shot saved by Michael Gibson and Caolan Murray fired wide. Drumkeen wrapped up the points when Conor Laverty got the third when he scored from a Peter McNamee right wing cross. The home team might have got a fourth, Lee Guthrie had a shot saved and Conor Laverty put in a good cross but there was no one there to get on the end of it. Swilly did pull a goal back with five minutes left but it proved to be no more than a consolation goal. Some good young players on both sides with Johnny Black and Lee Kennedy doing well for Drumkeen and Caolan Murray and Ryan McDaid showing well for Swilly.

USL: SWILLY WIN BATTLE OF THE ROVERS TO LIFT THE KNOCKALLA CARVANS CUP was last modified: July 13th, 2014 by John2