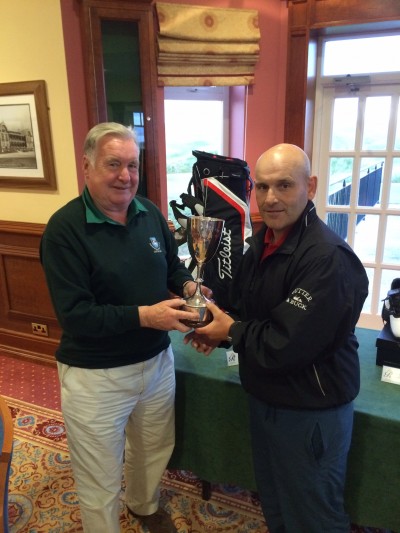 The morning 18 holes took place over the Sandy Hills Links with the top 12 players qualifying for an additional nine holes over the Valley that evening.

The gross prize was won by Seamus Connor (5) with 46 gross pts.

Many thanks to the Casey Family who sponsored the first prize.

The Eammon McClafferty, Downings/London sponsored club competition on Sunday the 13th of July was won by Martin McDermott (5) who returned a superb 2 under Par 69 for a nett 64.

The Friday nine hole stroke on the 11th was won by Tommy Ferguson with 33 nett bot.

The Catherwood Cup Open Mixed Foursomes sponsored by Donal Boyle is scheduled for this coming Saturday the 19th and will be played over the Old Tom Morris Links.

There will be a club competition on Sunday 20th also over the Old Tom Morris Links.

at home on Sunday the 13th.

After an impressive away

performance where they claimed 3

matches from 7 the home team won

a total of 6.5 matches on Sunday to

make it comfortably into the Ulster

quarter final where they will meet

either Cloverhill or Ballyliffin.

Harkin and to his panel of players.

will play Warrenpoint in the Ulster

The match is scheduled for this Sunday

the 20th and the first pairing will

Congratulations to the Rosapenna Over 50’s team who

and won the two matches required to advance to the

county semi final where they will face Ballyliffin with

the away leg to be played first.

to Buncrana last Friday the 11th and were unfortunately

unable to overturn the 4-3 defeat from the

home leg. Many thanks to the team captain

Seamus Connor and to all the players for

their effort and commitment this season.

who face Cairndhu G.C at the Roe Park Golf

Resort this Wednesday July 16th at 5.00pm in the

Best wishes to the Rosapenna Barton Shield team who

Links on Sunday in the last 16 in Ulster.

The winners will play either Foyle or Ballyliffin

that afternoon for a place in the Ulster semi finals.

team will play Letterkenny G.C away on

Best of luck to Joe McHugh & his panel

On Saturday the 26th the Generations Cup,

presented by Mary Devlin will be played for

over the Old Tom Morris Links.

The format is one adult & one junior playing

All quarter finals of the 2104 Michael Bonner

Singles Matchplay must be completed by

Monday the 4th of August.

The semi finals of the Doubles Matchplay

must be completed by Monday July 28th.

early as possible for each round so that all ties

can be played within the specified time.

The third & final instalment of the 2014 staged

payment plan for golf fees was due on July 1st

and must be paid in full before Monday July 21st.

The Rosapenna Irish Senior Cup team have reached the Ulster semi final for the third year in a row.

On Sunday August 17th the Rosapenna team will face Cairndhu G.C at Royal Portrush Golf Club over the Dunluce Links.

The other semi final is made up of Dunmurray & Banbridge.

The Ulster final will take place that afternoon over the famed Dunluce Links.

The Rosapenna Golf Resort OPEN WEEK will begin on

Friday the 8th of August. Time-sheets will be available from

Any uncollected club prizes from the recent presentation are available for collection from the Pavilion Golf Shop during opening hours.