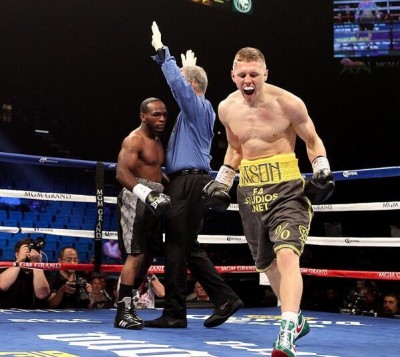 CALIFORNIA DREAMIN FOR JASON AS HE GETS READY FOR NEXT BOUT

Jason Quigley will be back in action next month when he fights on the undercard between Kell Brook and Shawn Porter.

Donegal fight fans will make there way to California next month to see their hero Jason Quigley.

Quigley will be back in competitive boxing action next month when he fights on the undercard between Kell Brook and Shawn Porter.

Quigley announced himself on boxing’s biggest stage at the MGM Grand Garden Arena, Las Vegas on Saturday night with a devastating first-round KO of Howard Reece.

Quigley looked in fantastic condition for the fight, and while the win came against a fighter with a poor professional record, you couldn’t help but be impressed by the manner of the victory.

It was sensational performance and some way to introduce yourself to boxing fans in the USA.

Quigley’s opponent next month has not yet been confirmed, but the Finn Valley man will return to training and get ready for the bout on August 16th.

The fight takes place at the StubHub Center in Carson, California and Quigley’s fans will be dreaming of another sensational first-round KO.

CALIFORNIA DREAMIN FOR JASON AS HE GETS READY FOR NEXT BOUT was last modified: July 16th, 2014 by Mark Forker