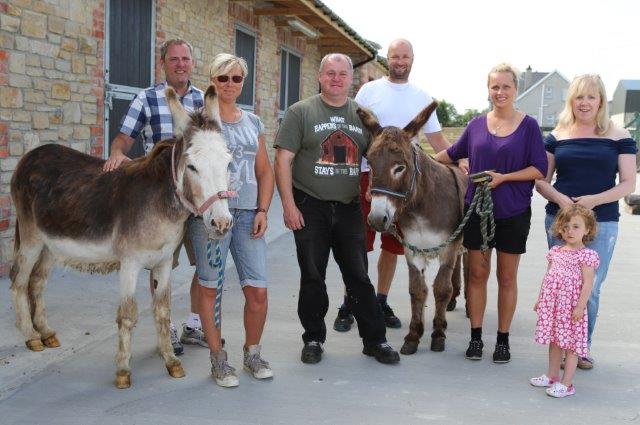 Donegal Doneky Sanctuary owner Danny Curran (centre) with Daniel and Ingela Reinholdsson, Patrike Sármens and Monica Andersson from Sweden when they arrived in Ireland to choose a few donkeys to take back to their 300 acre farm in Sweden. Also in photo are Sandra Curran and Elsa Curran. (North West Newspix)

A Swedish businesswoman’s plan to help children with autism has saved three abandoned Donegal donkeys and could result in many more being rehomed.

Monika Andersson owns a 300 acre equestrian centre in Nykoping on the outskirts of Stockholm.

They came up with the idea of opening a specialist area at the centre to work with children with autism.

However, they were worried that horses may not be suitable for the children with special needs.

Monika and her family opted to use donkeys instead but with just 400 or so donkeys in all of Sweden, they didn’t have a lot of choice.

Indeed Monika revealed she had only ever seen one donkey in her entire life.

In stepped ex-pat Charles McSweeney-O’Rourke, who is originally from Ardara, but now lives in Sweden and is friendly with the Andersson family.

He contacted the Donegal Donkey Sanctuary and a visit was arranged.

On Monday last Ms Andersson and some other family members including centre manager Ingela Reinholdsson took a plane to Ireland with the intention of choosing two donkeys to ship to Sweden from Donegal.

The group spent three days deciding which animals to take back home with them.

But they were so impressed by their visit that they chose three donkeys and the paperwork is now being filled in to send the animals abroad.

The three lucky donkeys are named Reuben, Hans and Eeyore.

Monika and her company have even agreed to pay all the costs in shipping the donkeys back to their new heated home in Sweden where they will form part of the animal therapy treatment programme.

The move to Sweden is a real rags to riches story especially for Reuben who had been stabbed with a pitchfork and suffered various types of cruelty before being rescued.

Danny Curran of the Donegal Donkey Sanctuary, which cares for more than 60 donkeys at its centre in Raphoe, said he hopes it is the start of a wonderful relationship.

“Things have moved very quickly but the bottom line is that three donkeys are now moving to a wonderful new home.

“The lovely thing about it is that one of the donkeys was a victim of cruelty, another was found wandering on a road and the other came from a good home.

“Donkeys have a lovely nature and I have often seen children with autism hugging them and building up a special bond with them.

“It is early days yet but our Swedish friends have said they may be interested in taking more donkeys again next year if things work out,” he said.

Danny revealed that their Swedish counterparts are now even planning an open day at their equestrian centre for the Donegal donkeys.

“It will be a bit of a journey getting them there and we are still filling out all the necessary paperwork but we’re delighted.

“We have more than 60 donkeys at the Donkey Sanctuary and that’s a lot of work on a daily basis.

“Hopefully we can build up a nice working relationship with these people and can give these lovely animals a good life for the rest of their days,” said Danny.

The donkeys will not leave Ireland for another month but fans of the Donegal Donkey Sanctuary can keep up with their new lives in Sweden on the centre’s Facebook page.