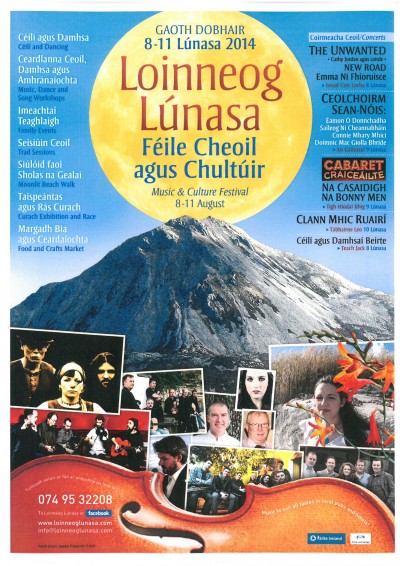 The fourth annual Loinneog Lúnasa festival promises to be an unforgettable weekend of ceol, cultúir and craic. A celebration of Irish traditional music and culture.

Taking place from the 8-11th August and attracting music enthusiasts from all the world, the line up includes Na Casaidigh, Na Bonney Men, Clann Mac Ruaidhrí,  The Unwanted and New Road all performing in various venues throughout the parish.

Emma, who is deeply inspired by Clannad and Altan, will perform her new song which is about Gaoth Dobhair and how it feels coming home, aptly called “Ar ais go Gaoth Dobhair”.

This young singer is exactly what Loinneog Lúnasa is all about.

Mairead Ní Mhaonigh and sister Ann have both commented on what a natural musical talent Emma has, that she has the ability to mix modern with traditional and sound original.

Festival organizer Cathal O Gallachóír, says that “This festival not only celebrates musical tradition, but also nurtures and encourages musicians and singers to carry the tradition forward.

“This is why there are workshops, recitals and concerts with the best of Irish music.

Other special events include a special one-day event dedicated to Sean Nós Singing.

If you’re interested in Sean Nós as a beginner or otherwise and would like to learn new songs and techniques, this is the perfect opportunity.

Throughout the day each artist will teach two songs.

They’ll then perform a concert later in the evening joined by the renowned piper Gay McKeon, (CEO of NPU) on the uileann pipes.

The uileann pipes are a regular highlight at Loinneog Lúnasa, with last year’s ‘Tionól’ attracting pipers from all over the country and expect this gathering to continue this year.

Gay Mc Keon will deliver workshops between 10 and 3pm and there will be a rare opportunity to ‘try the pipes’ with local piping teacher Conor Day and overseas Cuban student Alexander Suarez Mendez on Saturday the 9th between 10 and 1pm.

Alexander Suarez Mendez is part of the Buena Vista Pipers Club in Havana – In 2011 Gay Mc Keon was invited to play at Celtfest.

He had brought along sets of pipes for people to try, and said, “There were queues of people waiting to try and it took off from there. (Journal.ie)

Alexander is currently in Ireland following a fundraising campaign by Irish pipers to bring this piping student to Ireland to learn more about the pipes, including making them, so he can bring these skills back to Cuba and continue to teach.

Gay said, “Alexander is innately musical and people will be thrilled to hear him play. Even the way he interprets slow airs, which is a difficult thing for anyone even if you are immersed in the tradition. It is astonishing.”

So those of you who are interested in the uilleann pipes are in for a special treat at Loinneog Lúnasa this year and we anticipate some unforgettable sessions in the local bars and hotels.

Gaoth Dobhair, the heart of the Donegal Gaeltacht and an area famous the world over for being a cradle of Irish culture and home to musical acts such as Enya, Altan, Clannad, Donal Lunny, Bothy Band, and Clann Uí Dhomhnaill of Skara Brae and younger acts like an Crann Óg and Noílín ní Cholla is proud to promote such a rich tapestry of local talent.

With music and singing workshops, set dancing, open mic, craft market, a full moon beach walk and fun for all the family, there was never a better time to visit Gaoth Dobhair.

All this and spectacular scenery and atmosphere, Loinneog Lúnasa presents a musical backdrop to a wonderfully cultural, family friendly festival.

Also check out the Loinneog Lunasa Festival flybreak offer via Dublin and Glasgow in association with mng.ie & Donegal Airport.