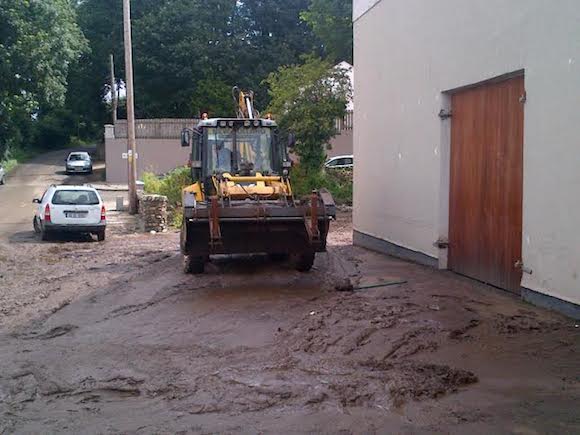 THE FLOOD AFTERMATH: COMMUNITY HALL AND HOMES WRECKED IN FLOODS

RAMELTON community hall and six homes nearby were being cleaned up today after last night’s floods.

Local volunteers and council staff have spent the day clearing up the mess left by sewage-soaked mud which poured into the hall last night.

The town’s youth marching band was practising inside the hall when the flood hit and had to be rescued by a farmer driving a tractor and trailer.

However it could be months before the hall and the homes are repaired.

Floors and furnishings were being ripped out today as the clean-up effort got underway.

Workers driving JCBs were attempting to remove the bacteria-infested mud from the road between the houses and the hall.

Minister McHugh praised the efforts of local people and promised “all help possible” for those affected when a stream running under the road burst its banks.

Roads and bridges in Fanad and Inishowen were badly damaged by last night’s downpour.

Tarmac was also ripped up and torn away in Burt, Bridgend, Burnfoot and Buncrana.