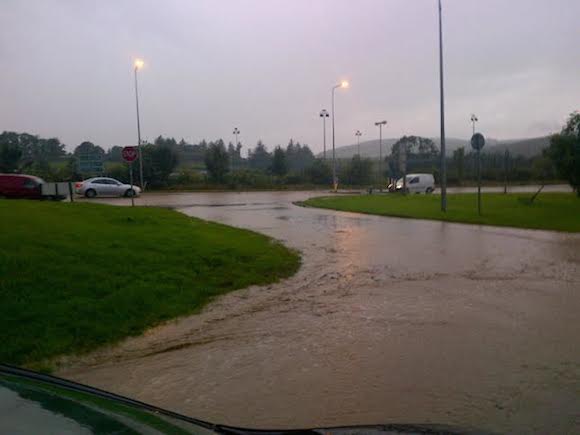 Flooding at Illistrin this week. Pic James Doherty for donegaldaily.com

Donegal County Council has reassured the public that it is doing its best to repair a backlog of damage caused by Tuesday night’s flash-flooding.

The council revealed it received 40 emergency calls from the public as the floods ripped up roads, flooded buildings and blocked drains from Letterkenny to Ballyshannon.

A council spokesman said it is now prioritising the calls after hundreds of thousands worth of euro in damage.

“On the night of 5th August, the County and in particular areas of Letterkenny / Rathmelton / Carrigart / Fanad/ Burt/Bridgend/Ballyshannon experienced heavy rain and localised flooding.

“Approximately 30 locations have to date been notified and inspected by the Council where there are culverts blocked by washing out of clay / silt and gravel. These locations will need to be cleaned out.

“In addition there are a number of locations where more significant damage has occurred with roads or bridges washed away.

“The Council is currently establishing the repair costs for these and how they can be dealt with,” said a statement.

The Council said it appreciated the cooperation of the general public at this time and appreciates the notifications it received.