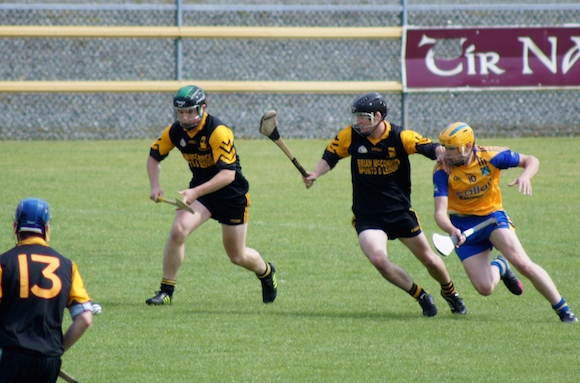 St. Eunan’s scored a second victory in this year’s Donegal senior hurling championship with a hard fought win over holders Burt in O’Donnell Park on Saturday.

With both sides coming into the game unbeaten their clash was eagerly anticipated. Unfortunately, the stormy conditions put paid to any prospects of entertaining hurling. Playing with the wind in the first half, Burt opened the scoring with a long range point in the first minute from Christopher McDermott.

This proved to be the last score from play in the half. Defences were well on top throughout, with Martin McGrath and Kyle McGrath outstanding for Burt and Francis Lennon and Conor O’Donnell prominent for the hosts.

Both sets of players pressured each other throughout, forcing a series of wides and turnovers of possession. Burt’s Ronan McDermott and Colm Breathnach for St. Eunan’s exchanged early frees.

McDermott extended the visitors’ lead to three points with two further strikes in the 12th and 17th minutes. Breathnach pointed after 21 minutes, followed by an immediate reply from McDermott. The final score of the first period was a third Breathnach strike on 26 minutes after strong play from Gearóid Leahy won a free.

Just before half-time Enda McDermott broke through on goal for Burt but was denied by a last ditch hook from Conor O’Donnell and a fine save from James Connors. The away team took a two point lead into the break, 0-5 to 0-3.

St. Eunan’s wasted no time in using the wind advantage. An early Breathnach free closed the gap. Seán McVeigh began dominating the midfield area and he scored a superb point from the wing to level affairs.

Burt goalkeeper Paul Burns pulled off a top class save from a Leahy shot, and only great defending by Ciaran Dowds denied Stephen Doherty a certain goal for St. Eunan’s.

The home team seemed to have struck a decisive blow in the 42nd minute when Breathnach fired a penalty to the roof of the net. However, Burt fought back and they equalised with ten minutes left when Micky McCann finished a loose ball to the net after a goalmouth scramble.

The next score would prove vital. Both sides missed opportunities. Burt came close when a Christopher McDermott shot rebounded off an upright to safety. Three minutes remained when Breathnach pointed a free from fifty metres. The home team sealed the win with a close range point by Seán McVeigh and a fine strike from midfielder Colm Flood at the end of a run through the Burt defence.