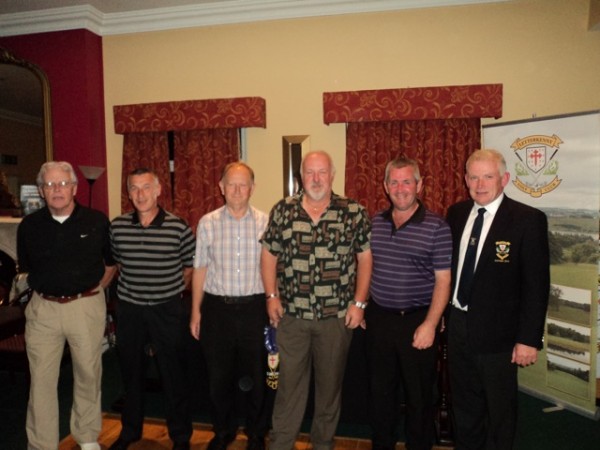 Starting with a “blank” at first hole and a double bogey at ninth, scores did not look prosperous for Henry until he registered a birdie at 11th and finished with another birdie at 18th to shoot a one under par gross 35 on back nine, the equivalent of 25pts.

In second place was Joe Brown [18] who, while recording a massive 24pts on front nine, faltered with back-to-back double bogeys at 15th & 16th to finish on 43pts.

In third place was Dessie Ferry [10] continuing a streak of good form of late who, despite a bogey at 1st, recorded birdies at 2nd and 7th for a 40pt finish and in fourth place was the ever present Kevin Hannigan [8] scoring birdies at 10th, 11th and 16th, but a lapse at 18th cost him dearly.

The Cat 4 winner was James Durning [23] with 36pts and picking up the visitors prize was Ivan Morton [12] with 37pts.

Sat. 16th competition was a late start for members following the successful Lady Captain’s Day [Catherine Cooke-Harkin] to whom congratulations are forwarded from all the male club members.

Coming to the fore in the afternoon sunshine was the club’s very popular Ulster Cup team captain Charlie Coughlan [12].

Giving him a close run was the club’s house convenor Enda Mannion [13] who, despite a great start with a birdie at 1st, blew his chances of an outright win with a double bogey at 6th and a “blank” at 18th.

Despite three “blanks” on front nine, Peter’s birdie at 15th gave him an inward nine of 20pts and an overall winning score of 39pts.

Mon 18th had the club host the Lady Captain’s prize to Juniors and taking top honour was Ronan Daly [21]. Second place was won by Cian Harkin [13] and in third place was Eoghan Harkin [25]. Cat. 4. Prize was won by Darragh Mc Grath and best gross was the ever-present Jack Patton [5].

The club’s under 16 boys team did us proud over the weekend by beating Ballyliffin in the semi final of the Donegal League.

The match finished 3-3 overall, but letterkenny won by 5 holes and now await the winners of Donegal GC or Gweedore in the final. Congratulations to all involved and every success in the final.

Dates for the Diary:

Junior prizegiving for the 2014 season will be held in the club on Sunday 7th September. There will be a junior scramble earlier in the day over 9 holes with food and soft drinks in the clubhouse afterwards.