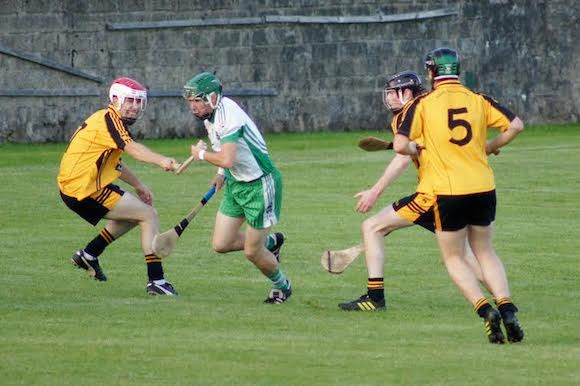 The visitors got off to a good start with two quick points from Seán McVeigh, but these were cancelled when Lee Henderson struck a goal in the 4th minute after David White broke though the St. Eunan’s defence.

Two further Henderson frees were answered by a Colm Breathnach free and a third McVeigh strike, leaving the home team one point ahead midway through the first period.

Mac Cumhaills dominated the remainder of the half, with Gavin Browne, Justin McGee and Jamesie Donnelly sweeping up to great effect.  Sustained pressure yielded three further frees for Henderson and an Aaron McAuley point on the stroke of half time opened a five point gap for the Ballybofey team, 1-6 to 0-4.

St. Eunan’s stormed back into the game on the resumption, led in particular by Eugene Organ and McVeigh.  Organ found the target twice in three minutes with long range shots.  When he finished a ground ball to the net on 36 minutes the sides were level.

Two Breathnach frees and a McVeigh point after a superb run though the home defence put St. Eunan’s three points ahead after 45 minutes.  Mac Cumhaills were reduced to 14 men immediately afterwards when Justin McGee received a straight red card.

However, two Henderson frees brought them back in touch.  McVeigh pointed again on 50 minutes, but the tie was levelled by scores from McAuley and Bernard McMenamin with five minutes left.  A Breathnach point in the 57th minute edged the visitors in front.  Henderson levelled with a 65, and he settled the outcome two minutes into injury time with a wonderfully struck free from inside his own 65 metre line that just cleared the crossbar.