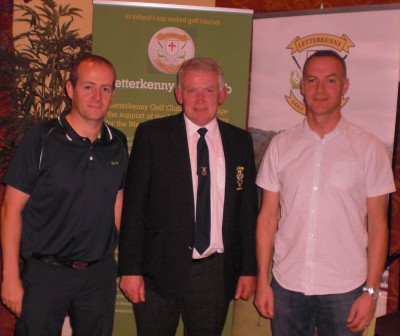 Monday 18th Cat.4. competition, of which members’ scoring has been showing a vast improvement of late, was played over 11 holes and it was Albert Strain who took top honours with 25pts.

In second position was Philip Doherty on 23pts.Members are reminded of the John J. Doherty Memorial Cup on Sunday 28th Sept.

Members would like to congratulate Paul Doherty, a great supporter of Cat 4 competitions, and his wife, on the birth of their baby girl Ava Grace on Sunday 17th August.

Wednesday 20th Open, sponsored by Kellys Toyota, saw another increase in entries and it was Cat. 3 member Eddie Margey [13] who took top prize with a score of 41pts.

Eddie’s birdie at first was a stepping stone and, despite a “blank” at 7th, another birdie at 18th gave him 22pts on back nine to secure the win.

Friday 22nd Open Stroke, which showed another upsurge in entries and a great welcome to our many visitors from our neighbouring Portsalon G.C., was won by LK member John Doran [8], on a 3-way BOT with a return of 80 gross shots.

The Global Tiles & Bathroom Open, played on Sat. 23rd, had the cat.4. members warming up for the President’s Prize to their category and coming to the fore was Michael Gibbons [21]scoring 20pts and 22pts each nine respectively for a return of 42pts which included a “blank” at 6th. In runner-up spot was “King” Kenny [King][8] who, with the help of birdies at 2nd and 12th and despite a double bogey at 14th, recorded 39pts to relegate Oisin Mc Avinney [20] to third on BOT. Despite a birdie at 13th, Oisin’s “blanks” at 14th & 17th saw him lose out. In 4th place was Patrick Keeney [11] with 38pts which included a birdie at 5th and an unfortunate double bogey at 15th. Cat 4. Prize was won by Emmett O’Donnell [21] with 37pts., Gross was collected by Eamonn Mc Dermott [3] scoring one under gross on front nine with birdies at 4th, 8th and, with a blank at 16th, followed that with another birdie at 18th. Visitors prize was won by Bryan Manley [13] with 38pts.

Sunday 24th confined competition, played in blustery winds and sunshowers, saw Michael O’Donnell stretch the field by a four point margin when he returned 41pts with the help of 21pts on front nine, followed in second place by single figure handicapper Brendan Mc Grath [6] who’s three hole score of birdie, bogey, birdie at 5th, 6th and 7th gave him 20pts on front nine and an overall return of 38pts.In third place was Darragh Mc Menamin [4] with a great back nine in worsening conditions of a one under gross, 35 shots [21 pts] to win a 3-way BOT on 36pts.

Juniors: Congratulations to Cian Harkin on winning the Ton-Up Cup in Portsalon on Friday last. Cian returned the winning score of 38 pts and is now playing of 11 handicap at the age of 12. Club junior Liam Kenny also deserves mention for winning through to the Semi Final of the Kernaghan Cup on the same day. Well done lads. Monday last was the final major competition of the summer, the President’s prize to the juniors, and good luck to all those going back to school. There will be a fun Scramble on Sunday 7th September at 3-30 sharp,shotgun start. All prize-giving will commence afterwards in the clubhouse with food and soft drinks. The course will be closed on the Sunday from 1-30pm.

A big “thank you “from captain Gerard Duffy to all those who played in the Donegal League team and gave their best for the club while giving their time and commitment to play and reached the semi final before going down to a really strong Buncrana team. We wish them well in the final.

Club members would like to offer congratulations to club President Barry Ramsay and his wife Ailish on the celebration of their 50th wedding anniversary and wish Barry every success on his President’s Day on Saturday 30th. Congratulations also to club member Clive Davidson and his wife Hayley on the birth of their baby girl.

Competition secretary would like to point out that their has been a notable increase in the number of [1] unsigned competition cards; [2] unentered handicaps; [3] unreturned cards [nr]; please note these “disqualification” errors!