A Donegal-based doll-making business is celebrating its second anniversary – and we have a collection of three of its wonderful dolls to give away free to one Donegal Daily reader.

Arklu, which is based in the CoLab at LYIT in Letetrkenny, makes the very cool Lottie doll.

The brainchild of Donegal native Ian Harkin and business partner Lucie Follett, Lottie made her first appearance in 2012 as the first ever ‘pro-girl’ doll, promoted as a positive role model for children, addressing parental issues linked to raising girls in modern society. 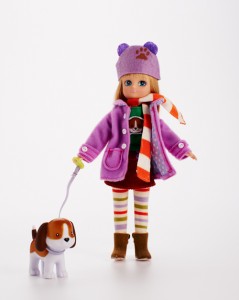 This milestone not only celebrates two years in business for the start-up, it also highlights the notable progress of the brand to date. Arklu currently employ 5 people in Letterkenny, with plans to grow this to 10 employees by the New Year.

Since her introduction to the market two years ago, Lottie has won 19 awards, received approval and praise from parents, professionals and campaigners alike, and is sold in over 30 countries across the globe.

In the US market Lottie is now stocked in Toys R Us, Barnes and Nobel (book chain), FAO Schwartz (New York), Hallmark (card retailer), as well as over 700 independent stores (plus via Amazon). So, whether in the UK or across the water, Lottie is beginning to fill the void that had previously existed for a considered choice of doll!

Managing Director of Arklu Ian Harkin comments: “We are delighted to celebrate our second anniversary. The doll category is widely recognised as the most competitive category within the toy industry, so to be able to get a foothold in the industry in such a short period of time is extremely rewarding. We won’t be resting though, with six new products launching in the coming months and a further nine in January 2015.

“We’ve worked to develop Lottie’s character and world which we’ll be sharing through a series of six chapter books launching in spring 2015. We have recently finished a short animation which we will be pitching to broadcasters in Cartoon Forum in France next month.”

Having previously garnered worldwide acclaim and awards based on product quality and innovation as well as its principle, Lottie is addressing the issues raised by parent’s one doll at a time!

The dolls themselves were developed for children aged 3-9. Lottie is a fun, educational and an aspirational doll which represents a real little girl, one who doesn’t wear make-up or jewellery and can stand on her own two feet. Lottie was designed alongside child psychologists and nutrition experts to sculpt a doll with a body proportionate to the average 9-year old.

The Lottie motto is ‘Be Bold, Be Brave, Be You!’ which the brand strive to put across in all of their efforts, be it dolls, animations or books, watch this space for future Lottie innovations and visit Facebook and Twitter for news and competitions.

To win a choice of THREE Lottie dolls, simply answer this question – Where in Donegal is Arklu based? Simply email your answers to info@arklu.com