DONEGAL MUM PLEADS WITH FANS TO HELP HER SON WALK

A Donegal mum is hoping fans attending this Sunday’s GAA All-Ireland semi-final clash between Donegal and Dublin will help her kick start a fund raising campaign that will help her son to walk again. 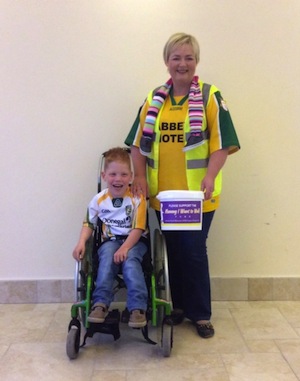 The ‘Mammy I Want To Walk’ drive is all about raising funds for five-year-old Paul Doherty from Gleneely just outside Killygordon.

There is no assistance available at home as the HSE can’t fund the operation so the family has to seek help in the USA.

The brave you lad, starts school tomorrow (Friday) has spastic quadriplegic cerebral palsy and to date has had physio, occupational therapy, speech therapy, conductive education, Botox injections, three weeks at the Peto Institute in Hungary and all sorts of medicines medicines but to no avail.

“Since Paul could talk he always told me: “Mammy, I want to walk,” said heartbroken mum, Anne Marie.

“It broke my heart to see him stuck in a wheelchair not been able to run about with his brother and sister or even to be able to pick up a toy from the floor that he wanted to play with.

“Paul is a happy, playful and full of devilment ! As his mother, I always fought to get him the services and therapies he needed. While the HSE gave Paul what they could they could never offer him the opportunity to be able to walk.

Then Anne Marie discovered what could be the start of a way to help Paul recover.

“I came across an operation in America called Selective Dorsal Rhizotomy (SDR). The operation involves cutting some of the nerves in Paul’s spinal cord that are misfiring the muscles in his leg. Paul has been assessed for this operation and has been accepted. The neurosurgeon, Dr. Park, in St. Louis Hospital, Missouri, USA expects Paul will be able to walk with the aid of crutches/walker if he gets the operation.

“This operation has been a successful part of cerebral palsy treatment in the USA for years. The NHS in the UK has just recently decided to trial the operation for 120 children there. By the time the operation is available in Ireland it will be too late for Paul. We need to raise a minimum of €60,000 for Paul’s dream of walking to be a reality. This would cover the cost of the operation and the first 4-6 months of a two year physio programme which all has to be funded by us privately as there is no HSE funding available for such an intense programme.

She hopes the supporters at Sunday’s match can play their part in Paul’s bid to recover.

“We will be in Dublin on Sunday for the Donegal – Dublin game with our buckets collecting for Paul’s operation. We will be wearing funny hats with wee “legs” around our necks and high vis vests. Please can you help us by donating or whatever you else you think would be beneficial to our cause. We would be very grateful in whatever you can do.”

She added they were setting up a Facebook page with details of how people can donate to the ‘Mammy I Want To Walk’ fund in the next few days. But in the meantime Anne Marie is asking all the people going to Dublin to be aware of our cause and give what they can.

The capacity of Croke Park is 82,300. If each person gave an average of just 1 euro, Paul could have his operation and entire post op physio programme!” she added.