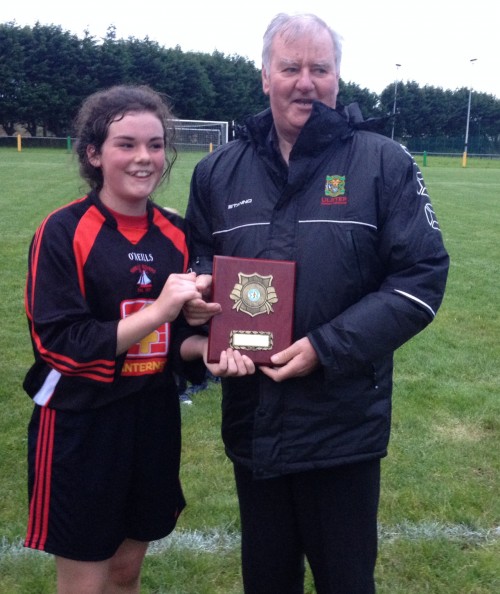 Danielle McGinley for Finn Valley set the pace of this game within 3 mins of the start with a fine shot on the Swilly net only for Alannah McFadden to push the ball out to the feet of Aisling Irwin to clear the lines for Swilly.

Both centre mid field players for both teams counteracted each other moves with great passing between both sides.

Bronagh Durning left back for Swilly made a great run to cross to Molly Wheeler but her shot went wide.

Finn Valley’s Katie Long put Swilly’s defender Sinead McCahil under pressure who calmly passed back to the keeper Alannah who kicked the ball long to Catherine Grier who rounded two defenders and gave Valley keeper no chance with a superb shot, low into the corner of the net.

This seem to spur the Swilly team on with Kelly Buchanan passing out left to Jenna McGroarty however a fine tackle from Rachel Lawne cleared the danger.

Needless to say Alannah McFadden was the busiest of the keepers in the last 10 mins of the first half when she was called on to make a one on one save with forward Katie Long and mins later Brenda Carr shot was pushed over the bar for a corner.

The resulting corner by Ridhcheall Dochartaigh was cleared by Aisling Irwin to Catherine Grier who made a 50 yard running waving in and out of players before Catherine made a tackle just inside the valley box.

Second half started with Alannah McFadden make a great save from Alisha O Donnell.

As Finn Valley pushed forward Catherine Grier and Kelly Ann Buchanan got more space to run at the Valley defence which all stood up to the challenge.

Valley had a few more great passage of play and swift passing between Dina, Rachel Lawne and Katie Long.

Swilly should have extended their lead in the last five minutes when Catherine Grier passed to unmarked Kelly Buchanan in the Valley box but Kelly’s shot went wide of post, this wasn’t the last chance that Swilly had within 2 mins, Bronagh Dunning ran from left back and crossed but the valley defender cleared the ball before Molly Wheeler got her shot off.