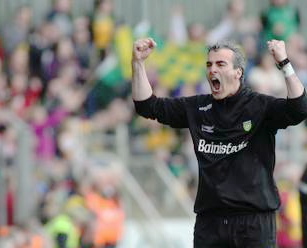 CATHAL Mac SUIBHNE’S GAA BLOG: INTO THE FINAL AFTER BEATING THE UNBEATABLES

Those were the immortal words uttered by Pete McGrath as he addressed thousands of Down supporters in Newry after he had masterminded his team to the 1991 All-Ireland title, against the supposedly unbeatable Meath. Those words seem very apt this morning.

Twenty-three years on, Jim McGuinness is the master and his Donegal side have beaten the team that couldn’t be beaten.

Things were looking ominous early on as a Paul Flynn inspired Dublin looked like they were going to run riot and they raced ahead with a series of excellent points. They never managed to raise a green flag though and that was vital for Donegal to stay in the game. Paul Durcan made a wonderful save from Diarmuid Connolly and that, allied with the introduction of Christy Toye, swung the pendulum towards the green and gold. Toye’s tackle and dispossession on Michael Dara Macauley in the first half was a big moment and got the Donegal support off their seats and got the adrenalin going.

The training camp in Enfield last week had many speculating that a new tactical grand plan would be unveiled by McGuinness yet Donegal stuck to what they’ve always done but crucially produced their best ever display under his stewardship. There were slight variations here and there but ‘The System’ is still alive and well and when executed to perfection it is unbeatable.

One key tactical variation was the positioning and interchanging of the Glenswilly duo, Michael Murphy and Neil Gallagher. This Dublin team hadn’t been tested all year and it was well documented that they had a suspect full back line but no team had been able to really get at it. This game was billed as Donegal’s defence stopping Dublin’s attack – but McGuinness knew how to turn the tables and attack the Dublin rear guard.

He knew if they could create space in behind and get runners in there, there was joy to be had. Murphy was being picked up by Rory O’Carroll while Michael Dara Macauley shadowed big Neil. With the two players constantly changing it meant that O’Carroll often found himself at midfield with Macauley marooned at full back – two players out of position and in unknown territory. It caused confusion in the Dublin defence, generated space and with three goals to show it proved to be a marvellous ploy by Jim.

Murphy actually spent more time at full forward yesterday than he has done all year but he still managed his customary tour de force all action display, he was simply everywhere. He nailed a forty yard score when the first half comeback was in full swing just minutes after he had missed a gimmie. His role in the opening goal was crucial – after the first ball didn’t go his way he put in a hit on Michael Fitzsimons with the ball popping up to Colm McFadden who fed Ryan McHugh to finish.

It is these types of situations and these types of plays that mark Murphy apart; he can be the typical full forward kicking scores and plundering goals but he can also play any number of roles and make chances out of nothing. The tackle on Fitzsimons was reminiscent of his hit on Conor Gormley in the Ulster semi-final of 2011, which led to a McFadden goal and a Donegal victory. Murphy has now firmly put himself in the frame for the player of the year award – more importantly he will have a chance in three weeks’ time of climbing those famous Hogan Stand steps again.

McHugh’s goal capped an amazing few minutes of football from Donegal, scoring an unanswered 1-4 having been five points in arrears. The Dubs were stunned and once Donegal hit the front they never looked back. The Kilcar man was in the right place at the right time again shortly into the second half to finish wonderfully with his hands after Anthony Thompson’s raid down the right wing.

Gallagher at midfield was a colossus again yesterday and should collect his second All Star come seasons’ end. Despite coming up against the athleticism of the Dublin midfield, he played his own game, at his own pace and bossed the middle sector – as he did against Cork in the semi-final two years ago.

There were towering performances all over the field from Donegal men with many players producing their best when it mattered most. Paddy McGrath was absolutely immense from start to finish, throwing himself into tackles and putting his body on the line. In truth, it’s hard to remember McGrath ever having a bad game for Donegal, going all the way back to the U21 campaign of 2010. Despite the success this team has enjoyed, players like McGrath and Thompson are under-rated by many yet winning teams simply don’t function without players with their selflessness and drive.

Karl Lacey went about his business quietly but efficiently yesterday, shutting out the playmaking abilities of Alan Brogan, while the McGee brothers continued the fine form they’ve shown all year. Paddy McBrearty again made a huge contribution off the bench and it will be interesting to see how he is used in the final.

It was a day of smiles all round but possibly the biggest grin we saw was that of Colm McFadden after he scored his side’s third goal. He had come into sharp focus in the previews for the game and while his shooting was still quite erratic at times he finished with 1-3 and his effort, work rate and commitment cannot be questioned. For a man playing below his usual standards he has now scored 1-10 over the course of three big championship games against Monaghan, Armagh and Dublin.

That third goal put eight points between the teams and Dublin would only get as close as six come the final whistle; Donegal’s game management and cuteness showed in the final straight as they closed the game out. In the last quarter, almost every time Dublin scored a point, there was a Donegal player down looking for attention from the physio and it killed any momentum that the Dubs might have gotten.

The role of the Donegal minors in proceedings yesterday cannot be over stated. They were underdogs in their joust with Dublin and even after conceding a needless goal, they showed great heart to get back into the game and get ahead at the finish. As people milled around the bowels of Croke Park between the minor and senior games, you could sense that every Donegal person was walking that little bit taller and it gave huge impetus for what lay ahead for the big one. To have both teams now in action on All-Ireland Final day is the stuff of dreams.

There’s a special feeling about winning a semi-final; Donegal had such a wretched record in last four encounters for so long, winning them and realising that your going to be there on the biggest day is hugely satisfying.

If there is a downside to what was one of the great days for Donegal football, it was that there was no cup handed out yesterday. It was an incredible display but it will be worth nothing unless the job is completed in three weeks against the Kingdom. The two epic battles with Mayo will have Kerry well primed for an assault on Donegal and despite supposedly being a team in transition, they will present a massive challenge. The crux of Jim’s game plan will revolve around containing Kieran Donaghy and Murphy’s rival for the player of the year award, James O’Donoghue.

Yesterday was The Messiah’s finest hour as a coach and he can take his place with the all-time greats with a second All-Ireland later this month. Believe!

CATHAL Mac SUIBHNE’S GAA BLOG: INTO THE FINAL AFTER BEATING THE UNBEATABLES was last modified: September 1st, 2014 by John2