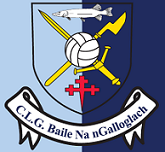 The Donegal training fund draw has 2 tickets to the All Ireland Final to be won. For your chance to win a pair of tickets and support our Minor & Senior Football teams.

Simply visit DonegalGAA.IE and go to the link for SHOP raffle tickets are available or contact any member of the Club Committee.

Congratulations to Chris Bradley who has been selected to represent the Western Australia State GAA team in the 2014 Magners Australasian GFHA State Championships held in Melbourne this October. Chris’s team will be competing against selects from the other Australian states as well as teams from New Zealand and throughout Australasia. Chris has been playing for Greenwood GFC in Perth for the past number of years were he is sometimes deployed as a wing half back, far removed from his free scoring corner forward days for CLG BnaG!

Congratulations to cousins Shaun and Paul Shields whose teams won the London Intermediate and Junior Championships respectively at the weekend in Ruislip. Shaun was on the bench for North London Shamrocks as they defeated St Brendan’s 3-12 to 0-9, while Paul starred in midfield for Moindearg as they beat Thomas McCurtains 1-5 to 0-7 in the Junior decider. Another former CLG BnaG man, Mark Anderson, had also been a stalwart for North London Shamrocks for several years before moving to Newcastle mid-season. This was also the first ever Championship victory for the North London Shamrocks who were formed ten years ago this year. In a further twist the cousins could face off against each other as there is no Junior UK Championship so Moindearg will now play North London Shamrocks to see who progresses in the UK Championships. There were several local Donegal men between both teams, with Dultach Molloy, Ciaran Greene and Niall McClafferty of St Eunans along with Gweedore man Joe Sweeney representing the Shamrocks, while Donwings lads Danny McBride, Shea Coyle, Gary ‘Ban’ McClafferty and Aaron McClafferty represented Moindearg

Well done to Moyle Hill man Brian Sweeney who captained the Donegal New York team to the New York Junior Championship last weekend in a 3-14 to 2-6 victory over Manhattan Gaels. Brian played up through the ranks here at the Club where he was a pivotal figure for the Senior team for several years before emigrating to New York. It is great to see him still involved in the GAA with the expat community and a couple of years ago he was a member of the New York panel that played Sligo in the Connaught Championship

With just one game left Cormac Friel is leading the way in the Fantasy Gaelic. Cormac is currently ranked 17th in Donegal, 64th in Ulster, and 334th nationwide. The Club itself is also doing well in 12th place nationally, with fellow Donegal clubs Naomh Conaill in 3rd and Kilcar just ahead of us in 11th. The top 10 at the minute is:

Our Senior Ladies will take on St Eunans in a 13-a-side game this Saturday evening in Milford. Throw in is at 7pm and all support would be greatly appreciated.

The Club’s U21 team progressed to the quarter-finals of the Under 21B Championship after they recorded a comprehensive win over St Naul’s in Mountcharles on Tuesday past. The boys took their time to settle and their ball handling left a lot to be desired as they trailed by four points to nil after 11 minutes. Cathal Mc Gettigan got Milford’s first score after 17 minutes, but they were lucky not to concede a goal three minutes later, with Shaun Gallagher making a fantastic save. Na Galloglaigh were playing against the wind in the first half, but they finished the half strongly with Kane Barrett (2) and McGettigan (free) getting points, while Adam Serrinha scored a brilliant goal to give the visitors a two-point lead at half-time. Kane Barrett kicked a point within 20 seconds of the restart, and Luke Barrett added another, before Dylan Hegarty tapped in a goal. The St Naul’s goalkeeper then dropped a McGettigan shot into the net, and the centre-forward soon added another 1-1 to his tally. Hegarty finished off a brilliant team move to score Milford’s fifth goal, and James Doyle, Luke Barrett (2) and McGettigan concluded the scoring with points. Dylan Hegarty won every ball into his corner, Sean Black and Gary Merritt had solid games in defence, while Doyle had a very good second half. However, it was Jonny Logue who was selected as Tj Evesson’s man of the match. The boys will now meet Killybegs in the quarter-finals, with the game postponed until further notice due to Donegals win at the weekend.Team: Shaun Gallagher; Kieran Sheridan; Sean Black, Gavin Grier; Brandon Toye, Gary Merritt, Cathal Diver; Jonny Logue, Luke Barrett (0-3,1f); James Doyle (0-1), Cathal McGettigan (2-3,1f), Adam Serrinha (1-0); Tony Mcnamee, Kane Barrett (0-3), Dylan Hegarty (2-0). Subs: Emmet Conaghan for Diver, Odhrán Coll for Sheridan; Caolan Bolton for Toye, Hugh Mc Menamin for Serrinha.

Our U16s will clash with Glenswilly next Monday at 7pm in Moyle Park in the Championship. All support for the lads greatly appreciated.

Our U16 Ladies defeated Convoy last Tuesday night and will now take on Buncrana in Buncrana next Monday night. The winners of this game will then go into the County Semi-Final. Well done to our U16 girls on their defeat of Convoy last week. It was an entertaining game and the girls played some excellent football. They led by 10 points at half time but Convoy came back strong in the second half. They managed to claw it back to 4 points but all the girls worked really hard to push on and secure the win on a scoreline of 3-14 to 3-10.

Having lost out to Glenfin in the Senior Championship the Minors will be looking to avenge that result when they take on Glenfin in the Minor Championship in a few weeks time. This will also be a two legged affair with the first match away on the 14th September and the home game on the 21st. All support would be greatly appreciated for these two games.

Our U13s will be looking to bounce back from last weeks defeat to neighbours Downings with a win over Red Hughs at home tomorrow night. Throw in at Moyle Park is 7pm and all support great appreciated. Our U13s played at home to Downings on Wednesday evening and were defeated by a strong and well organized Downings team. Most of the damage was done in the first half against a very strong breeze but on a positive note they finished the game the much stronger team with good displays from Owen O’Donnell, John Matthews and Dillon Dorrian.

Lucozade Sport are back with another promotion this year which was very beneficial to us last year. However this year they are NOT looking for the bottle caps, instead they are looking for a promotional code that is found printed on the bottle underneath the wrapper. We would like to ask all our players and supporters to hold on to any Lucozade Sports bottles they come across and leave them in the designated bottle bin at the Clubhouse. Thanks again for the help collecting last year and we look forward to colelcting even more this year!

Club membership will be soon due for the 2014 year. Please be aware that Donegal tickets will only be sourced for paid up members of the Club. The rates remain unchanged from 2013:

Alternatively you can subscribe to the Club Lotto Database. For €17 a month you will receive:

– Entered into every weekly Lotto draw

– Automatically in a Christmas Hamper Draw (For subscribers only)

– 11 free weeks entry into the lotto

CLG BnaG Child Protection and Welfare Policy & Procedures and CLG BnaG Alcohol and Substance Abuse (ASAP) prevention Policy information sessions have been held for all members of the club executive and all those involved with underage teams. There will be further information sessions for underage members and their parents/guardians following the next registration in 2014. Please visit the ‘downloads’ section of our website (Milford.Donegal.gaa.ie) and view the policy for yourself. If anyone has any queries or concerns or comments please contact the club Children’s Officer Marian McNulty at 086/8506405 or marian.mcnulty@lyit.ie

CLG BnaG is currently in the process of creating Sub-Committees to help implement and achieve the targets of a 5 year plan. If you feel you can contribute to the running of the Club in any small way, either in time or in ideas, please contact MilfordDonegalGAA@gmail.com, 0863400082 or send a PM. The Sub-Committees are as follows:

All paid up club members will now be able to avail of a €10 discount on 3 month membership. Normal 3 month membership is €80 but will be available to members for €70. If interested contact Jack Duddy at Evolution Fitness beside the mart in Milford

Club gear is now available to order. Anyone who has ordered club gear but yet received it are to contact either Aidan or Barry. The range of club gear includes Hoodies, Tracksuits tops, Windcheaters, hats, navy polo shirts, white polo shirts, and t-shirts. There is some lovely gear available at very reasonable prices and photos are available to view on the club Facebook page. Orders can be placed with Agnes Ryan on 086-8194751.