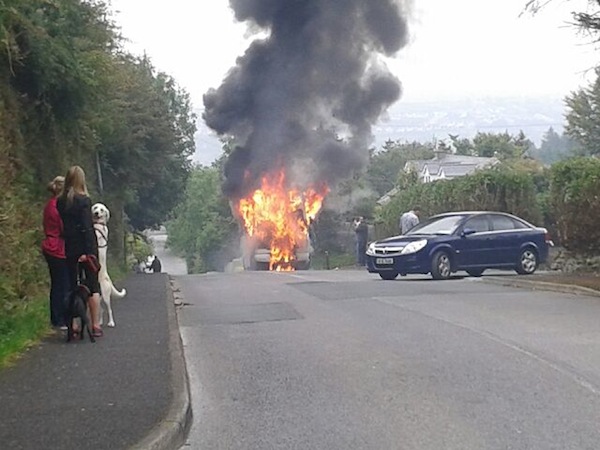 The scene of the bus blaze.

BREAKING NEWS: Gardai and the fire services have rushed to the scene of an incident in which a bus caught fire in Letterkenny.

The bus which caught fire in Glencar, Letterkenny this morning.

The bus, which was located in the Glencar area, was completely destroyed in the blaze which happened just before 9.45am.

It is not known how the blaze started but it is not understood that anyone was hurt.

Donegal Daily understands the bus was only purchased this week and this was its first run out.

Two tenders of the fire service rushed to the scene just before 10am and brought the blaze under control.

Traffic in the area was being turned back from the blaze which sent a huge plume of smoke into the skyline.

One local man said “I’m not sure what happened or if anyone was hurt. I was just driving into my house and I saw this big blaze in the middle of the road.

“It was only then that I realised it was a bus on fire. I’m not sure if it was a school bus or not.

“I hope nobody was hurt. The fire brigade were arriving so I pulled away to allow them to do their job.”

The remains of the bus after the fire was put out.