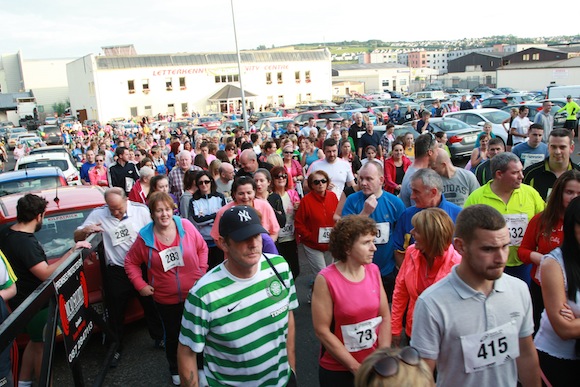 Some of the huge crowd which gathered for the first Shaun Graham memorial Race this evening. ALL PICS BY BRIAN McDAID OF THE CRISTEPH STUDIO

A staggering crowd of almost 2,000 runners and walkers turned out for the first Shaun Graham Memorial Run in Letterkenny this evening.

The late Shaun Graham’s mum Katriona during this evening’s memorial event for her son. Pic by Brian McDaid.

The popular young Letterkennny man was tragically killed in a car crash in Rathmullan last year.

The huge turn-out, which even caught organisers by surprise, was testament to the high esteem in which young Shaun was held.

Among those who took part in the 3K race was Shaun’s beloved mum Katriona and other family members.

Another family member spoke at the end of the event to thank all those who came out.

Participants took advantage of the beautiful evening to take part in the event with many pushing buggies for what was areal family event.

The huge crowd come back in the Port Road towards the town. PIc by Brian McDaid.

MASSIVE CROWD TURN OUT TO PAY A LOVING TRIBUTE TO TRAGIC SHAUN was last modified: September 10th, 2014 by Stephen Maguire