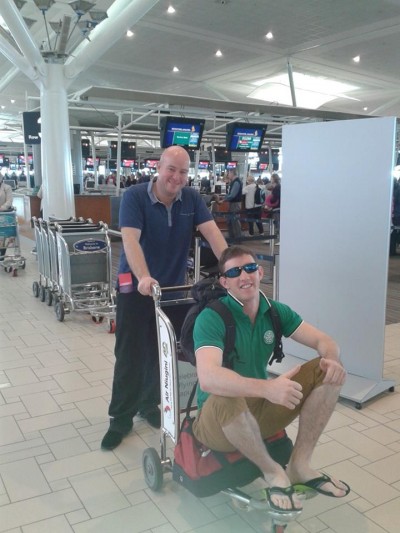 Charles Boyle and Pat O’Donnell before they set off on their long sojourn to witness Donegal defeating Dublin in the All-Ireland semi-final.

COUNTDOWN TO CROKER: Donegal ‘Superfan’ Charles Boyle is in a race against time to secure a coveted ticket to the All-Ireland final against Kerry.

Charles travelled a staggering 16,738km from Australia for the semi-final clash with Dublin.

And when Jim McGuinness’ men toppled the Dubs, the Carrickfin man vowed to stay on for the final on September 21st.

Charles outside Croke Park before the All-Ireland semi-final victory with Dublin.

But now the 26 years old, who is an electrician based in Perth, is finding it impossible to nail down a golden pass for the ticket.

His decision to extend his stay for the All-Ireland final also means Charles has sacrificed spending Christmas with his family here in Donegal, but it could all be in vain.

Charles told Donegal Daily, “I’m in the same boat as many other Donegal supporters regarding tickets, but it’s looking very unlikely I’ll be able to get a ticket for the match now.

“I’m not a club member because I’m living in Australia, and obviously the club membership has increased and the demand for tickets is even greater than two years ago.

“My cousin got me a ticket for the All-Ireland final two years ago, but even he’s having trouble getting one for himself this time around.”

Charles revealed it was a difficult decision to sacrifice Christmas with his family, but said All-Irelands don’t come around too often and you don’t know when they’ll be in another one.

“I’ll be gutted if I can’t get one, as I’ve sacrificed spending Christmas with my family in order to extend my stay in Ireland.

“It was a difficult decision, but I couldn’t bare the thought of returning to Australia with Donegal in the All-Ireland final.

“You never know when Donegal will be in another All-Ireland final, and you can’t take it for granted they’ll be there every couple of years.

“Hopefully someone somewhere will be able to help me get a ticket, but I appreciate there are other Donegal supporters in the same boat as me.

His commitment to Donegal can’t be questioned, Charles flew back from a family wedding in Spain on the Saturday night before the All-Ireland final with Mayo.

Charles was also very critical of the ticket allocation awarded to Donegal for the match, and criticized the GAA hierarchy for their ticket distribution process.

“The amount of tickets given to Donegal and Kerry is a joke, it’s a disgrace that genuine supporters of both counties are overlooked in order to ensure the corporate side of things are looked after.

“Donegal and Kerry should be given 35,000 tickets each, and the other 12,000 should be distributed amongst the other counties and corporate entities thereafter, it shouldn’t be the other way about,” he fumed.