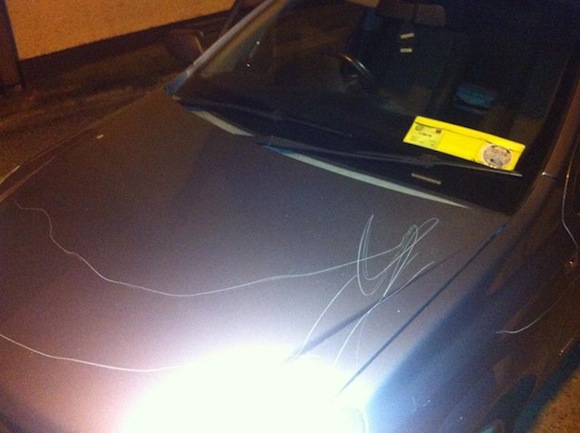 Some of the disgusting damage caused to Eibhlin’s car in the attack in Dunfanaghy last night.

A young woman has been left fuming after thugs ‘keyed’ her car in Dunfanaghy.

Eibhlin Nic Giolla Chearra was enjoying a night out with friends in the popular seaside town.

The side of Eibhlin’s damaged car.

The town was thronged with people as the local Jazz and Blues Festival was taking place.

Eibhlin parked her car close to Café Arnou and the Oxygen Hair Studio on the edge of the town at about 8pm.

However when she returned around 11pm, her car had been completely vandalised by someone using a car or a similar instrument.

The bonnet of the car as well as the side panels and wings were all scraped and will cause hundreds of euro to repair.

Eibhlin said she was completed disgusted at the people who carried out the unprovoked attack on her car.

The car behind Eibhlin’s car was also vandalised and badly scraped.

Eibhlin said there was a massive crowd in the town and someone must have seen what happened.

She has reported the incident to the Gardai.

“I am absolutely sickened and my blood is boiling. There was a massive crowd in the area and someone must have seen something,” she said.