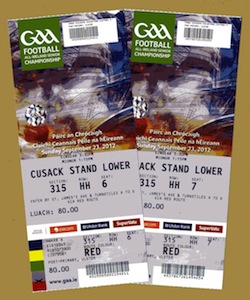 UP to 40 per cent of tickets sent to some clubs for their members for Sunday’s All-Ireland final were terrace tickets for Hill 16 and the Nally Stands, fans say.

Whilst non-club members will be wondering what all the fuss is about – when they’d love to have any sort of tickets – diehard club members are less than happy.

It seems tickets for Cusack and Davin Stands are at a premium, whilst hardly anyone has seen a Hogan Stand ticket, according to supporters who contact Donegal Daily.

More than 16,000 tickets were allocated to the Donegal County Board, with 84 per cent of them going directly to clubs.

The Board distributes the rest through its executive, players, managers and their sponsors.

One rural club member, aged 78, complained: “It seems that half of the tickets we got were for the Hill and the Nally. That’s grand if you’re a young fella but it’s no good to me.

“We picked envelopes in a lucky dip and I wasn’t so lucky. I’m hoping I can get a swap with someone, especially as the Minors are playing and standing for five hours is beyond me these days.”

There were similar complaints from other clubs, particularly in the north of the county.

“Looks like we’ll have the Hill and Kerry is getting the rest of Croke Park,” complained another reader.

Meanwhile we’ve been inundated with ticket requests from fans – some travelling from Sydney, New York and even across Europe hoping to get tickets.

We have two to give away – courtesy of Donegal Creameries. (and that’s all we have).

You can enter here:

The winner will be announced at our Up for the Match night at the Mount Errigal Hotel on Wednesday, doors open 7.30pm for an 8pm start.

More details on our poster:

FANS UNHAPPY AT LARGE NUMBER OF TERRACE TICKETS FOR ALL IRELAND FINAL was last modified: September 15th, 2014 by John2