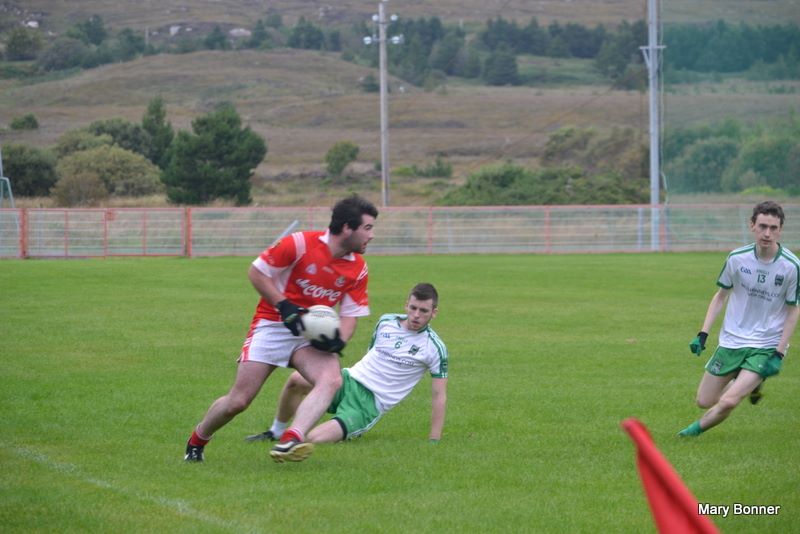 The Green Machine: Conor Greene helped Dungloe to a crucial victory over Termon in the Donegal SFC. Pic by Mary Bonner.

Dungloe continued their unbeaten run this season by recording an excellent win over Termon at Rosses Park in the Donegal SFC earlier this afternoon.

Dungloe won the Division Two title and went the entire league campaign unbeaten, they took that form with them into the championship and earned a crucial win against Termon.

Conor Greene was outstanding for the hosts and he was ably assisted by Adrian Sweeney who was as lethal as ever.

Dungloe opened the scoring through Adrian Sweeney and Greene, but the visitors posted three points in-a-row to take the lead.

Two points from Daire McDaid and one from Christy Connaghan edged Termon ahead.

Dungloe responded through Adam Neely to level up the game and that’s how it stayed until the break.

Dungloe upped the tempo in the second-half and really took a stranglehold of the match.

With Greene and Sweeney again the chief tormentors for Tony Boyle’s Dungloe side.

They edged Dungloe out to lead by six with ten minutes to go.

Termon rallied though through the outstanding Daire McDaid for Termon.

He scored three points unanswered to bring Termon back to within a score of Dungloe, but Dungloe used their experience to run down the clock and secure the win.

It was a tremendous individual display from McDaid who scored seven of Termon’s total of eight points.

Next up for Dungloe is a derby match with local rivals Gaoth Dobhair next Sunday in Magheragallon.

Termon host Killybegs next weekend in desperate need of a result to keep their Donegal SFC hopes alive.