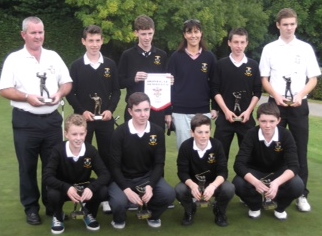 Maintaining the pressure in the Cat 4 Golfer of the Year stakes was the “in-form” player at the moment, Albert Strain, who seems to be lining up the John J. Doherty trophy as his end of year climax.

Playing consistantly well during the summer months, Albert has continued his run during some changeable weather and returned a winning score of 19pts over nine holes to gain another ten points on the ladder. Running close in second place on 18pts was “Mr. Mac” himself Victor Byrne, fresh from his disappointment in the final of the club’s Mc Donald’s sponsored Mixed Foursomes but also hoping to finish his season with that John J. trophy.

CAT 4 Final, the John J. Doherty Memorial Cup will be played on Sunday 5th October.(Tee-time 11am-1pm)To qualify to play,competitors must have entered at least 3 competitions by the day of the final. There will be a €5e voucher for Brown’s on the Green for all those who enter to play. Presentation will be in the clubhouse afterwards at 9pm

Wednesday 24th Open was keenly contested by two of the club’s cat 1 members and, indeed, it took a BOT to separate them on the rostrum. Taking top spot on this occasion was Martin A. Gallagher [5] who, whilst recording birdies at 15th & 18th holes and a bogey at 16th, finished the back nine on 21pts for an overall winning score of 39ps. Rlegated to second spot was Eamonn Mc Glinchey [5] who had his best nine going out, and included birdies at 7th and 12th. In third place was a regular “top ten” golfer this season, Kevin Rafferty [9] with his birdie at 15th giving him 20pts on back nine but still one point short of that BOT with 38pts total.

Sat. 27th Open, again played in high temperatures for the time of year, was won by Cat 4 member Emmett O’Donnell [20] with a very moderate 36pts. Emmett’s birdie at the par three 5th hole just gave him the edge over runner-up Kieran Sweeney [7] who finished on 35pts.

Congratulations to club professional golfer Finnian O’ Doherty [scr] on his second placing in the gross section of the North West Alliance which began it’s new season at Barnhill on Saturday last. Finnian’s return of two over par 74 gross was bettered only by the North West’s leading professional of 2014, Michael Mc Geady.

Sunday 28th confined competition again saw a remarkable turn-out in the early morning hours, with members and general public alike then taking the opportunity of watching the final stages of the Ryder Cup in the exciting atmosphere and relaxation of the clubhouse bar, where Brown’s on the Green manager Noreen & staff once again provided the best bar food, finger buffet and, of course, beverages to add to such a special occasion. Out on the course, it was single figure handicapper Kieran Sweeney [7] who followed up his runner-up spot on Saturday with a spot higher on the podium. As recent scores suggest, Kieran has been looking through the “kitchen” window at the main prize several times but finally came through the door on Sunday. Playing “Faldo-like” golf, with a driver borrowed from his son, Kieran commanded the front nine with an outward level par 36 shots before dropping his first shot of the day at 10th. However, with fighting qualities honed from his many exploits on numerous club matchplay teams, Kieran recorded back-to-back birdies at 13th & 14th for a three over par 75 gross and 40pts. In second place, another golfer coming back to form of late, was Keith Shields [8] who, despite a double bogey at par five 2nd hole, had help with birdies at 14th & 18th to finish with 19pts each nine and a total of 38pts. Taking third place this time was Patrick Keeney [11] who, having made double bogey at 1st and “blank” at par three 5th, still managed to return 19pts on front nine to finish with 37pts.

Congratulations to Letterkenny Golf Club junior boys U-16 team who won the Donegal Youth Matchplay Pennent 2014! In playing the second leg at home in Barnhill, the lads were taken to a tie-break hole [1st] where they duly won a hard fought match against one of the tournament favourites, Donegal Golf Club [Murvagh]. Under the pressure of up to one hundred spectators watching this thrilling finale, Ronan Daly helped his partner Tom Doherty by securing the half with a five, leaving Tom having two putts to win the match, which he duly did, to bring this title to the club for the first time! The team included Jack Patton (Team Captain), Cian Harkin, Philip Cassidy, Evan Mc Croary, Tom Doherty, Ronan Daly, Dylan Mc Croary, Eoghan Harkin & Michael Shiel.