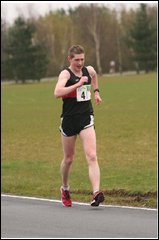 BRENDAN BOYCE NOMINATED FOR ENDURANCE ATHLETE OF THE YEAR

Brendan Boyce has been nominated for Endurance Athlete of the year by Athletics Ireland.

Milford man Brendan Boyce has been shortlisted for Endurance Athlete-of-the-year by Athletics Ireland, following the announcement of the nominations earlier today.

Boyce enjoyed an incredibly consistent season, but it was his performance in the European Championships which earned him a nomination and widespread acclaim.

Boyce, who is a member of Letterkenny AC, finished 16th and set a new personal best of 3:51.32 in the 50km Walk at the European Athletics Championships in Zurich.

Athletics Ireland announce the nominations for the 2014 National Athletics Awards in association with GloHealth and Emerald Crystal earlier this afternoon.

The awards will take place on Wednesday 26th of November from 12.00-3.30pm in the Crowne Plaza Hotel, Northwood.

The awards ceremony is a celebration of the many successes of our athletes during 2014.