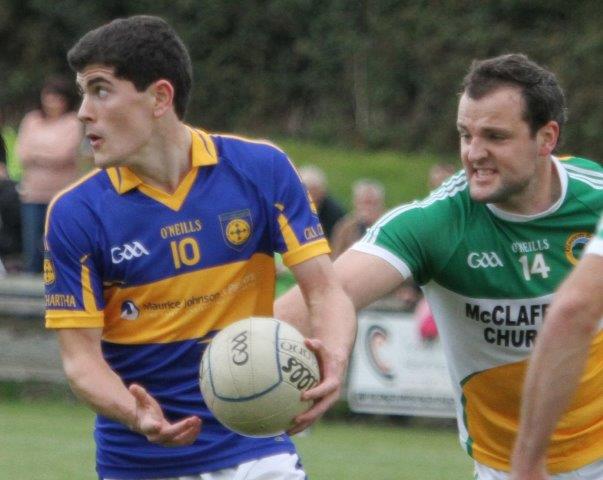 St Michael’s and Glenswilly have advanced to the last eight of the Donegal SFC following a nervy evening in Foxhall.

At the end of the match which Glenswilly won by two points, St Michael’s were left to nervously wait for news from Towney where Kilcar were playing Bundoran.

With Glenswilly defeating St Michael’s, Kilcar had to win by thirty points in order to advance.

They defeated Bundoran by twenty-seven points, running out comprehensive winners on a score-line of 5-15 to 0-03.

However, their valiant effort were in vain, as Rory Gallagher’s side were eliminated on scoring difference.

In fact if they had scored TWO more points, all three sides incredibly would’ve finished level on four points apiece with an equal scoring difference of +23.

Kilcar had been the favourites to win the Donegal SFC after defeating Glenswilly a fortnight ago, but a heavy nine-point home defeat to St Michael’s last weekend done the damage.

Glenswilly knew they needed a victory against St Michael’s to advance, but for 45 minutes it wasn’t looking good for Gary McDaid’s side.

Both teams set up with ultra-defensive systems in place, and it resulted in a truly dour game of football.

An incredible statistic from the match is that not ONE single point was scored by either side from play throughout the entire match.

St Michael’s were the brighter side in the first-half, and despite falling behind to an early Michael Murphy free, they seemed to be more comfortable playing the defensive system.

A free from Colm McFadden cancelled out Michael Murphy’s opener, and then an wonderful goal from Martin McElhinney rocked Glenswilly.

It was a wonderful move, McElhinney started the move in his own half-back line, and finished it superbly as St Michael’s worked the ball up the pitch at an incredible tempo.

McFadden then pointed a wonder-score from a placed ball to put St Michael’s ahead by four at the break.

Glenswilly plodded away in the second-half with no real joy, as they tried to penetrate the St Michael’s rear-guard in the second-half, but were time and again frustrated by the well-organised blanket defence employed by Tony Wilkinson’s side.

One free from Michael Murphy got them back to within one score of St Michael’s.

However, with fifteen minutes to go and with Glenswilly running out of ideas, Neil Gallagher launched a hopeful ball into the square and Michael Murphy managed to get a fist to it to send it to the back of the net.

The goal was a very soft concession from a St Michael’s point of view, and it gave Glenswilly a huge lift going into the last ten minutes of the game.

Two free frees, one from Gary McFadden and another from Murphy was enough to edge Glenswilly through.

The game was marred by a series of off the ball incidents, as the referee struggled to keep emotions in check in what was a highly charged atmosphere.

Incredibly the management from Glenswilly ran onto the pitch on several occasions throughout the game to dispute a number of calls the referee made.

One such incident seen Glenswilly manager Gary McDaid run thirty-yards to remonstrate with the referee over a tackle made by Martin McElhinney.

A melee broke out at the end of match again, as officials tried to separate both sets of players.

In the end both sides advanced, but they could meet again in either a Donegal SFC semi-final or final.