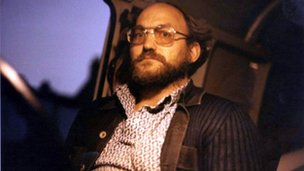 It comes as Gardai consider reviewing fresh evidence that Black abducted and murdered Mary in 1977 and also attempted to abduct her identical twin sister a year later.

Mary had been staying at her grandmother’s cottage at Cashelard, near Ballyshannon, when she disappeared.

Former Norfolk police officer Chris Clarke said: “There is confirmation that Black, 66, was a regular visitor to the local pub at Annagry, Co Donegal. He even appears on the police charge sheet, for after-hours drinking with others.

“His van was also noted parked regularly behind the Old Cope Yard at Dungloe and one witness later recalled hearing a whimpering or crying about the time of Mary’s disappearance coming from within Black’s van. She dismissed it at the time as a dog but later had second thoughts.

“In 1978, just a year after Mary went missing, Black was noted by female witnesses asking to be shown where Mary’s twin sister lived.

“When they refused, they said he became very angry, and agitated, saying he had a strange obsession with dead people.”

Mary had followed her uncle across a peat bog and was told to return home. But, even though it was only a few minutes’ walk, she never arrived. A massive search was launched but no body was ever found. A car spotted nearby was never traced.

Black is currently serving multiple life sentences for the brutal abductions and murders of four girls in the early 1980s, including nine-year-old Jennifer Cardy in Ballinderry, Co Antrim in 1981, for which he was convicted in 2011.

He was given a 25-year sentence, but told by the judge that it would be at least 89 years before he could ever be released.

Police in Britain are now asking a specialist complex case unit to examine files in relation to two other girls, April Fabb (13) who disappeared in Norfolk in 1969, and Genette Tate (13) from Devon who was killed in 1978.

And gardai are now considering examining ferry records from 1977-81, as Black was a regular cross-border traveller during the 1970s and 1980s.

At the time he was working across Ireland and the UK erecting billboard posters.