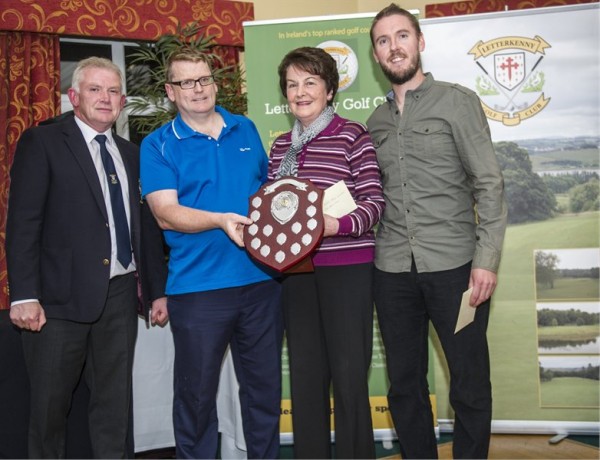 GOLF NEWS: TOM REDDEN COMES OUT ON TOP AT BARNHILL

Having been the proverbial “nearly man” over the past few weeks, master of his own short game Tom Redden [20] finally got to stand on the top rung of the ladder on Wednesday 8th Open when he returned a winning score of 40pts. Tom’s steady round of “handicap” golf could have rendered a higher return but for double bogeys at 17th and 18th holes. Just one point adrift in runner-up spot was Ronan Mc Cafferty [13] who, despite a double bogey at 6th and a “blank” at 7th, steadied his game to return a back nine of 23pts which included a birdie at 18th for a final tally of 39pts and, by virtue of BOT, relegated Joe Terry [11] to third place. Joe’s bogey at 12th no doubt added to his relegation.

Saturday 11th Open was won by cat. 2. member J.P. Clarke [12] who, despite a blank at 4th, recorded birdies at 11th and 16th for 24pts on back nine and an overall winning score of 42pts. Just one point behind in second place was John Mc Glynn [17]. With a birdie at 7th, John set himself up for a good 22pts on back nine to finish with 41pts whilst in third place, just one point behind that again, was Clive Watson [17] on 40pts.

Sunday 12th saw new family man Clive Davison [13] winning the confined competition. Having honed his short game into point making, Clive’s birdies at 13th and 17th, followed by an unfortunate bogey at 18th, gave him 40 points, enough to lead the field and keep cat.4 handicapper Joe Diver [25] in second place. The 13th hole was indeed unlucky for Joe as his “blank” left him just one point behind and robbed him of a possible win. In third place on 39pts was the ever present Conor Mc Gettigan [12] who erased his birdie at 2nd with an unusual “blank” at 7th,.Still finishing his outward nine with 21pts, that double bogey at 15th put paid to his winning score.

Congratulations to Simon Stephens and Maureen Shanaghan who won the Mc Donald’s sponsored club Mixed Foursomes. A hard match with Victor Byrne and Pathrica Mc Laughlin taking an early lead, it was close with never more than two holes in it until the par three 16th when Simon had a great tee shot and Maureen obliged with a wonderfull second and superb birdie to go dormey. Unfortunately, on seventeenth, a missed putt by Victor from six feet and match was over 2 & 1.

A great game and considering the experienice of the winners the match was a good one.

Congratulations to the Letterkenny Golf Club Donegal Senior Scratch Cup team who defeated firm favourites and cup holders Rosapenna GC over their two legged quarter final. In the first leg, which was played in Rosapenna on the previous Saturday, Letterkenny came away with a credible three matches to four. At Barnhill on Sunday, the home team won four matches to level at 7-7 and so onto tie holes .Eamonn McDermott, playing a true captain’s role, triumphed against Donal Boyle at the 2nd tie hole with a birdie to set up the meeting with North West Golf Club in the next round to be played on Saturday 18th.

Congratulations to all the club’s matchplay winners of 2014. At the presentation night on Wednesday last, club Captain Tom Mc Donagh and club President Barry Ramsay presented all the prizes as follows:

After extensive research and consulting many members the following are the considered names of holes on the course:

Barry Ramsay’s team who beat the eventual champions in the league stage and then lost to them in the knock out phase have promised not to be complacent this time out.

The popular putting quiz with debonair quizmaster Hugh McClafferty will start on the first Friday of November, the 7th. Hugh is actively seeking teams of four for this popular winter activity, the format being a head to head match between the teams with eighteen questions in all. A team has the option not to give an answer to a question but instead to “take a putt”. The putts get further and further away from the hole depending on how many attempts are successful. This has proved to be an enjoyable Friday evening past time, with last year’s surprise winners, under the leadership of Brian O’Reilly, presently on a diet of brain food prescribed by Rory to prove the doubters wrong and be the first team to retain their title. The rest of the team is made up by religion and classical latin expert Ronnatt and President in waiting Ann Condon. Last year’s other surprise team of Michael O’Malley is hoping to go one step further this winter , providing that Michael can curb his tendency to answer questions for the opposition. The one man team of Michael Bouchier-Hayes is sure to provide controversy and not a little entertainment, as he answers all the questions himself and never consults the rest of his team. The teamcontaining Keith Spence are sure to be there or thereabouts when the prizesare handed out although they are still complaining to anyone that is within hearing distance about being hard done by last year .They did not even make the knockout phase so, ????? .Neither did the champions of 2013 led by Niall O’Donnell. They are anxious to repair their tarnished reputation from last year and reports are that Niall, from his intimate knowledge of the behind the scenes matters at the Ryder Cup, really will have his team step up to the mark .

Barry Ramsay’s team who beat the eventual champions in the league stage and then lost out to them in the knockout phase, have promised not to be complacent this time out.

They are still dining out on being the only ones to inflict a defeat on the eventual Champions .The scorekeeper, who unusually never gets the scores wrong, will be on his/her mettle to keep getting their mathematics correct.

So, all in all, an exciting winter is being eagerly looked forward to .

Anyone who fancies getting a team of four together is asked to contact Hugh on [00353]876264679. Ideally, the team should have three “egg heads” and a good “putter”,but as it is all a bit of fun [and If you are into that] then why not enter. Singletons are welcome and even if you cannot get three friends to join you, come out for an evening of good craic.

High heels are optional for the person putting .The incoming Lady Captain, Margaret Birmingham, is available to give lessons.