Gardai investigating an arson attack on a church hall have appealed for three people in the vicinity of the hall to come forward. 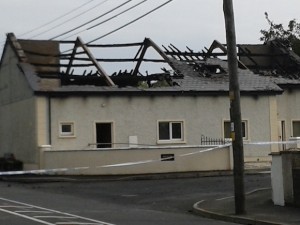 Inspector Pat O’Donnell made the appeal after viewing CCTV footage of the scene of the fire at Newtowncunningham Orange Hall on September 14th last.

The fire gutted the building including its roof and destroyed a large quantity of memorabilia inside.

Now Gardai want to speak with three men seen in the area of the blaze around 8am on the morning of the blaze.

One of the men was in his 30s with sharp features and was wearing a grey tracksuit.

Another man was out walking his dog at the time while the third was cycling past the blaze.

After a full investigation, Gardai say they are satisfied the fire was started maliciously.

There was a previous arason attack on the hall in 2010.

Inspector O’Donnell appealed to the three different people observed on the CCTV footage to come forward.

“Our investigation is ongoing but having viewed CCTV footage from the area at the time, we would like to speak to these three people.

“They may not have noticed anything but they may just be able to assist us with our investigation,” he said.