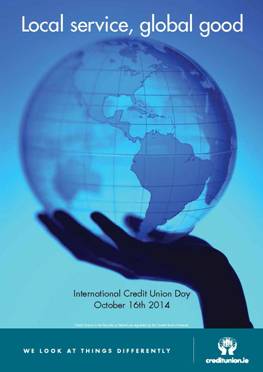 Letterkenny Credit Union has been committed to the local commumity it has supported for the last 52 years.

On Thursday, Letterkenny Credit Union will join other Credit Unions from around the world to celebrate International Credit Union Day, an annual event which celebrates the role financial cooperatives play in improving the communities they serve and the lives of their members the world over.

In Honour of this special day, Letterkenny Credut Union is giving one lucky credit union member the chance to win an Apple Ipad.

All you have to do is call to the office on International Credit Union Day and carry out a transaction on your account.

Since 1948, International Credit Union Day has been celebrated annually in October.

Each year, the international event affords the opportunity to remember credit unions’ proud history and promote awareness of and support for the credit union difference.

Speaking about International Credit Union Day, Gordon Randles, Manager at Letterkenny Credit Union told Donegal Daily, “The Credit Union movement only came to Ireland in 1958 but it tapped into the co-operative spirit in communities all over the country.

“It’s a worldwide phenomenon that just keeps on growing, which is a real cause for international celebration!

“It is a unique people-centred service to meet the unique needs of ordinary people.

“Anyone can join a credit union – one of the differences from opening a bank account is that you become a member – and not just a number.

“Yes, we’re changing to meet member’s needs, like introducing new electronic payment services, online access to accounts, new Travel and Car Insurances through www.coveru.ie and a raft of other services like bill pay and foreign exchange.

“But our ethos remains the same and change will not be allowed to compromise what we stand for, or how we serve members’ best interests.

The Irish credit union movement is one of the most popular in the world with over 3.3 million members across the 32 counties.

Letterkenny Credit Union like all credit unions exists to serve its members, providing a great place to save money and access affordable loans.

Established in 1962, Letterkenny Credit Union has been serving the people of Letterkenny area for 52 years

Gordon concluded by saying; “Letterkenny Credit Union is embedded in the community.

“Because of our members, we are able to play a vital role in the development and financial stability of the community.

“Our strength lies in our difference and we are very proud of this fact.