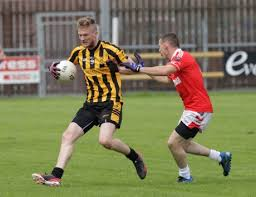 St Michael’s have set-up a semi-final clash with St Eunan’s after their Donegal SFC quarter-final victory over Dungloe.

St Michael’s have booked their place in the Donegal SFC semi-final after defeating Dungloe at Mac Cumhaill Park this evening.

Tony Wilkinson’s side have now set-up a mouth-watering clash with St Eunan’s in the last four of the Donegal SFC.

St.Michael’s employed the ultra defensive strategy they’ve used all year, and again, like it did against Kilcar a fortnight ago, it worked to great effect.

Dungloe struggled to break down the St Michael’s defence, who flooded their own half-back line with players, regularly getting thirteen men behind the ball.

That defensive formation is ultimately implemented to frustrate their opponents, and that’s what it did to Dungloe, who were forced to attempt scores from distance.

Dungloe also played a number of diagonal balls inside to forwards Conor Greene and Adrian Sweeney, but they couldn’t hold on to possession as they were simply outnumbered by the mass St Michael’s defence.

Dungloe faced an uphill battle right from the start, after the concession of a goal in the first minute of the match.

Good play from Christy Toye released Andrew Kelly who then set up Brian McLaughlin who fisted home past Ciaran Sharkey.

Adrian Hanlon then fired over two great scores within a minute, both coming from play which brought Dungloe back into the game.

However, a brace of points from Colm McFadden, Michael McGinley, and a great 45 from goalkeeper Marc Anthony McGinley put St Michael’s in a commanding position.

Dungloe fought back again though, and hit back with two good points from Shaun Sharkey, before McFadden added another score just before half-time.

St Michael’s continued to frustrate Dungloe in the second-half, and turned them over in possession on numerous occasions.

Then they counter attacked at great pace, and reeled off three points in the opening ten minutes to put them seven ahead.

Dungloe refused to give in and Adrian Hanlon kept them in touch with a couple of well-taken frees.

Dungloe then had a great goal opportunity, when a free from Adrian Sweeney dropped short and Noel McBride was on hand to punch it towards goal, it beat goalkeeper Marc Anthony McGinley but it was then cleared off the line.

Dungloe really needed a goal to get back in the game, and that was there opportunity, but unfortunately for Tony Boyle’s side they weren’t able to convert it.

St Michael’s were clever and economic in possession in the last fifteen minutes, and added a couple of points to put real daylight between the sides.

Adrian Hanlon and Barry Curran scored late-on for Dungloe to bring it back to six, and that’s how it ended.

Next up for St Michael’s is an enthralling semi-final clash with St Eunan’s next weekend.

Glenswilly will face the winners of Ardara and Naomh Conaill who meet in a replay on Wednesday night.