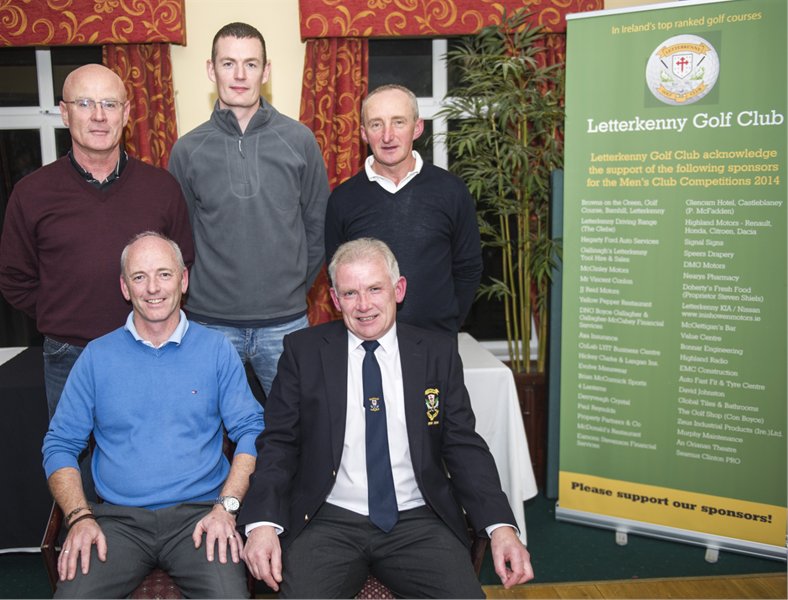 With the weather forecast for the week being unusually accurate, golfers who heeded knew exactly what time was best to play, with the mornings giving us an “indian summer” and the afternoons providing the usual Irish combination of strong winds and heavy rainfall.

However, undeterred by the latter prospect, Barnhill once again proved the favourite course amongst locals when almost two hundred took part over the week’s golf.

Leading the way on Wednesday 15th and following on from his winning way on the previous Sat., was J.P.Clarke [11] who, having had a great start with birdies at 1st & 8th, blemished the card with a blank at 9th.

Resurrecting his possible win with another birdie at 15th to return a back nine score of 38 shots, [two over par], 21pts, J.P. Finished with an overall 40pt, two points ahead of his nearest rival. In that runner-up spot was the “man for winter golf” so far, Kevin Hannigan [8] picking up his third prize in as many months. Although requiring a BOT to secure his placing and almost losing out altogether when he “blanked” the par three 13th, Kevin’s birdies at 11th & 14th proved enough for him to take that step further up the ladder. Definitely a possible for the club teams’ next year, Kevin.

Saturday 18th Open: Taking top spot was member Brian Mc Aleer [13] who has been producing some good scores of late and who finally got his deserved win with a moderate 39pts.

Despite winning through from a 4-way BOT, Brian’s general play yielded birdies at 2nd & 11th to give him two steady “nines” and, despite a triple bogey at 3rd, his 21pts on inward nine helped him across the finish line with an overall 39pts. Relegated to second place in that BOT was cat. 3 handicapper Edward Bradley [17] who, whilst having birdies at 3rd & 13th, will be disappointed that his “blank” at 16th had him lose out on top spot. In third place was Paul Carr [18] also on 39pts. “Weather” [sic] it being that time of year or what, I have noticed that there are quite a number of recent prizewinners playing well enough to be counted regularly in the top ten placings these last few weeks. Or is it the practice at the driving range? Keep it up guys!

Sunday 19th Confined competition proved an enjoyable one for Brian Mc Aleer [11], who recorded a back-to-back win in Letterkenny for the first time since Anthony Delap in 2012. Recording his sole birdie at 7th, Brian’s finish of 41pts was two points more than his Saturday’s winning score and two points more than second placed Clive Watson [16]who would agree that his “blank” at 12th cost him at least a BOT, but would have satisfaction with his birdie at 18th to finish on 39pts.

Great to see Letterkenny member Michael Costello return to his roots for another spell. Michael’s sojourn to the “States”, or should that be “estates”, had him missed by all the club members and, unusual as it was to see his score at the bottom of the list, we are sure that Michael will soon get used to parkland golf again.

Congratulations to our resident PGA Professional Seamus Clinton on his winning place in the Mulroy Links played on the Sandy Hills course at Rosapenna on Saturday last.

The popular putting quiz with debonair quizmaster Hugh McClafferty will start on the first Friday of November, the 7th.

Anyone who fancies getting a team of four together is asked to contact Hugh on [00353]876264679. Ideally, the team should have three “egg heads” and a good “putter”,but as it is all a bit of fun [and If you are into that] then why not enter. Singletons are welcome and even if you cannot get three friends to join you, come out for an evening of good craic. High heels are optional for the person putting .The incoming Lady Captain, Margaret Birmingham, is available to give lessons.

After extensive research and consulting many members the following are the considered names of holes on the course:

DATES for the DIARY:

Halloween Weekend of Golf will be sponsored by AUDI IRELAND.

The news you have all been waiting for: Come along on Saturday 1st November and find out how Letterkenny Golf Club will be offering you the chance to win €1,000 weekly! Yes, €1,000 weekly! Enjoy a night of music & craic. Read full details in next week’s daily newspapers and online sites.