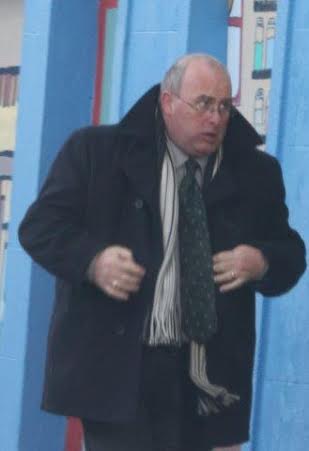 Austin Stewart from Fahan arrives in court in Carndonagh today

The family of a pensioner killed in a road crash have asked the Director of Public Prosecutions to review the case after a man appeared in court today.

Maura Porter was fatally injured as she walked home from Mass on December 30 last year close to her Co Donegal home.

It took more than 50 minutes for an ambulance to get to the scene close to the 70 year old’s home in Carndonagh on the Inishowen Peninsula.

Inspector David Murphy told the court that he was seeking an adjournment in the case.

“This incident led to the death of a local lady,” he said.

“And there is a mechanism in place to allow an appeal to ask the DPP to review the charges.”

Ciaran McLaughlin, solicitor for 64-year-old Stewart, said his client was willing to enter a plea to the charges.

He said no appeal had been lodged.

Solicitor for the Porter family Kerry Hegarty said the family only learned of the charges before the court on Sunday evening and are now asking the DPP to review the charges in the case.

Mrs Porter’s daughter Davina wept as she said: “My mother died as a result of this.”

Judge Paul Kelly agreed with Inspector Murphy that the case should be adjourned until January 20 next year to await the result of a possible DPP review of charges before the court.

An independent review of ambulance services was sparked following the death of Mrs Porter.

A number of areas including Donegal came under the microscope in relation to ambulance response times and availability.

Dr Reilly said: “I know there has been a lot of concern over a number of incidents recently. And I am concerned myself. I’m very happy for HIQA to bring this forward and have a very thorough review of all these situations of the entire service, tell us what they feel the problem is, where the problems lie and we will address them. Because the safety of our citizens has to be paramount.”

Local Deputy Charlie McConalogue, a personal friend of the bereaved Porter family, raised the issue in the Dail.

He revealed how there was an ambulance stationed less than half a mile away from where Mrs Porter had been knocked down but this had been called away.

At the time he called for an immediate investigation into the circumstances of the ambulance response time in the case and a review of ambulance services in Co Donegal.