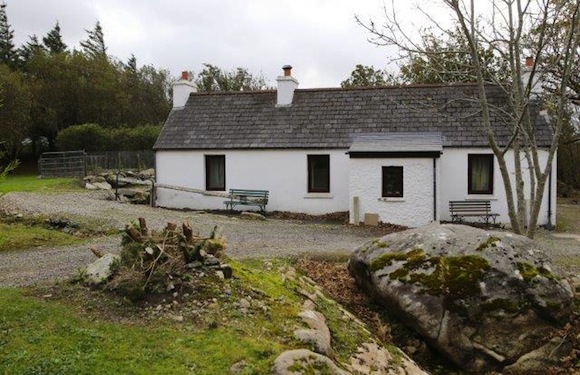 The cottage at Sandfield, Ardara which now officially belongs to the Eastwoods. Pic copyright of North West News Pix.

A couple have finally been allowed to buy their 300 year old Co Donegal cottage house after living in it rent-free for sixteen years.

Malachy and Lorraine Eastwood agreed a deal to buy the run-down cottage in Ardara in 1998 for IRL£10,000 from businesswoman Suzanne Rafferty.

However, despite moving into the home and spending up to €50,000 renovating it, the sale of the home was never formalised and they couldn’t get the deeds.

Auctioneer Ms Rafferty took the Eastwoods to court claiming the contract was not valid and sought damages.

Ms Rafferty, a mother-of-twins who had lived in Sweden for several years between 1998 and 2007, claimed the Eastwoods never paid rent and excluded her from the property.

However, barrister for the Eastwoods, Mr Peter Nolan, told Letterkenny Civil Circuit Court that his cients had tried their utmost to complete the sale over the years.

He said part of the deal was that Ms Rafferty would also seek a Section 49 application for adverse posession of some lands around the cottage.

He produced a series of letters from his client’s legal team to Ms Rafferty and her legal team asking for her to complete the sale including the Section 49 application.

It was also agreed in court that the Eastwoods had paid a sum of IRL£3,000 for the contents of the house as well as a IRL£1,000 deposit.

Ms Rafferty said she also gave Mrs Eastwood a diamond ring as part of the deal but this was denied by the defendants who said they had never seen a diamond ring.

Mr Nolan said the reality of the situation was one borne out of greed on behalf of the now London-based Ms Rafferty.

He claimed that despite agreeing a sum of IRL£10,000 for the cottage at Sandfield, Ardara, its value had increased substancially due to the arrival of the Celtic Tiger.

“I’ll tell you the real reason the house sale was not completed. By 2006, property sales had risen. You sold it in 1998 and it was now worth thee or four times that value and you were getting a bit windy and you didn’t want to complete the sale.

“You had been sitting on it for eight years and you had sold it for IRL£10,000 and it was probably worth four times that.

“You were sitting on it and hoping the sale would fall through and you would see a nice, handy profit,” Mr Nolan told Ms Rafferty.

Ms Rafferty claimed there had been “nepotism” used as the estate agent handling the sale of the cottage, Belfast-based Brendan Eastwood, is a cousin of the buyer Malachy Eastwood.

“I believe they (the estate agent) were acting in their profession for them (the buyers) and not for me,” said Ms Rafferty in evidence.

At one stage Gardai were forced to intervene in the dispute when Ms Rafferty arrived at the property in 2001 after she said she was informed that payments were not being made on the cottage.

Malachy Eastwood said “She arrived and asked me what business I had of renovating her property and that it did not belong to me. She got aggressive and with her being a woman and becoming aggressive, I called the Gardai in Glenties. They told her it was a civil matter and they couldn’t interfere,” he said.

Judge Mary Faherty said she was satisfied that the Eastwoods had tried to complete the sale of the cottage through their legal team.

She agreed with their barrister Peter Nolan that they were “ready, willing and able” to pay the amount agreed in 1998.

She found in favour of the defendants for the original price of IRL£10,000 minus the deposit and allowed one month for the balance to be paid.

No order was made for costs.

Speaking after the case to Donegal Daily, Mr Eastwood said he was pleased with the result but it had not really sunk in yet.

“We’re just delighted and it has been a long time coming. Our house can now be a home. It really hasn’t sunk in yet,” he said.