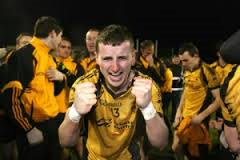 There has been widespread criticism aimed at the standard of play so far in this year’s Donegal SFC, but tonight both sides served up a fantastic game of football.

As expected St Michael’s employed a defensive strategy that has so far served them well in this year’s championship, and again like last Sunday night against Dungloe, St Michael’s got off to a dream start.

Andrew Kelly, who was outstanding throughout, pointed after an excellent team move involving several players.

Quick thinking from the ever bright Colm McFadden created the goal for Brian McLaughlin.

He spotted the full-forward free inside the square, and he delivered a wonderful pass to which McLaughlin expertly dispatched with his fist .

It was a dream start for Tony Wilkinson’s side, but in truth St Eunan’s responded superbly.

A brace of scores from Conall Dunne, and points from Dara Mulgrew, Conor Gibbons and Rory Kavanagh put St Eunan’s back in-front.

St Michael’s responded to level through the impressive Brian McLaughlin, but Eunan’s edged themselves in-front again with another score from Dunne.

Andrew Kelly released Brian McLaughlin whose his initial effort was well saved, but Kelly was on hand to fire to the back of the net, to put St Michael’s ahead by two at the break.

St Eunan’s needed a goal, and they got it, through a wonderfully well-worked move.

Kevin Rafferty and Rory Kavanagh combined well to release Mulgrew who finished with aplomb to put Maxi Curran’s side right back into the game.

A Conall Dunne free levelled matters before Sean McVeigh pointed a beauty with his left peg.

St Michael’s stormed right back though, Colm McFadden scored an absolute peach to level the match and then Toye added another to edge Michael’s in-front again.

Gibbons then levelled before McFadden pointed from a free to give Tony Wilkinson’s side the advantage as the clock ticked down.

However, Eunan’s were not to be found wanting, and the score of the night came from Rory Kavanagh an absolute peach of a score from way out on the line brought Eunan’s level again, and in the context of the game at that stage was huge.

St Michael’s were defended well and Eunan’s couldn’t find a way through, but up stepped Kavanagh with the wonder-score to level the match.

There was still plenty of drama left, St Michael’s had a late chance to win it, but Toye failed to convert his chance, and then St Eunan’s won it at the death.

They patiently worked it up the field, where the brilliant Gibbons found space before firing over to send Maxi Curran’s side to the final.

McFadden had a late chance with a free, but it would’ve have been an exceptional score if he pointed, it dropped short, and referee Seamus McGonagle blew the final whistle.