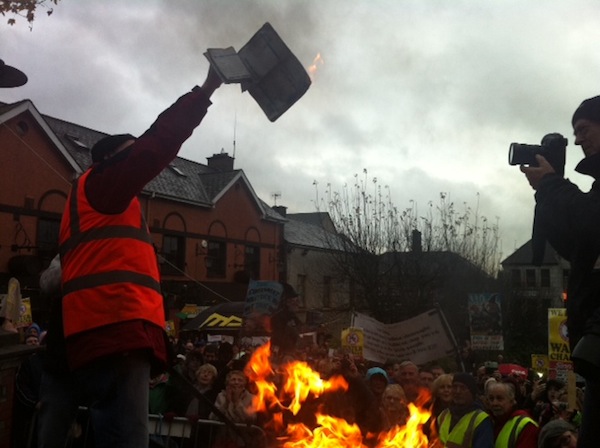 MORE THAN 7,000 PEOPLE TURN UP AT DONEGAL WATER PROTEST MARCH

An Irish water application formed is burned at the protest march today. Pic by Donegal Daily.

A massive crowd of more than 7,000 people has turned out in Letterkenny to send a message to Government that locals will not pay the water charges.

The huge crowd marched from the Port Roundabout to Market Square where speaker after speaker sent a message back to Dail Eireann and Irish Water.

The huge crowd, which included families and many children, was one of the biggest protest marches in living memory.

Part of the massive crowd of more than 7,000 at Market Square in Letterkenny. Pic by Donegal Daily.

A number of people brought forward their Irish Water Registration forms which were burnt in a barbeque to cheers from the crowd.

People carried banners including one which read ‘Irish Water Can Fliuch Off.’

Through the march the crowd chanted slogans including ‘From the rivers to the sea, Irish water will be free.’

Deputy Pringle received a huge response when he told the crowd “I have a message for the Government – shove your water taxes back where they came from.”

Deputy Mac Lochlainn said Irish politicians in Brussels had become too used to drinking wine and eating cheese to remember that Irishness was about being part of a community and being decent.

One interested spectator was Sinn Fein’s John Downey who sparked a huge political storm when he was arrested but released for questioning in relation to the Hyde Park Bombing.