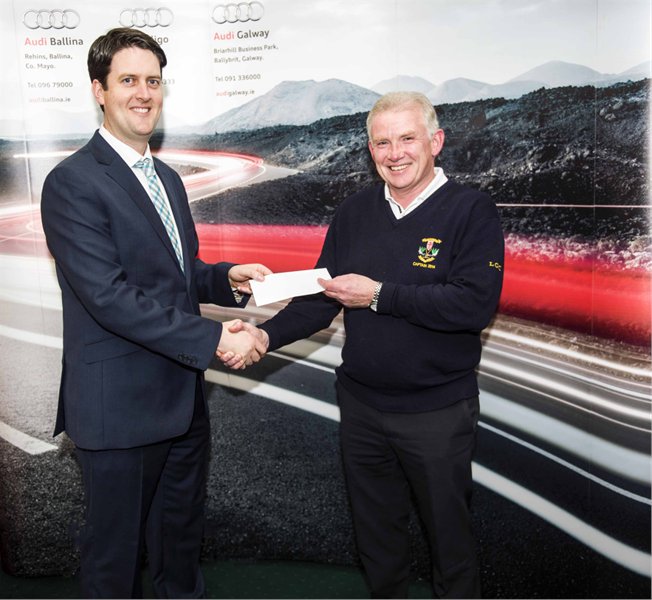 GOLF NEWS: KEVIN RAFFERTY COMES OUT ON TOP AT BARNHILL

Starting off a very busy golf and social week at Letterkenny Golf Club it was Kevin Rafferty [10] who once again took top spot with a hard worked scoring card.

Kevin’s strange looking run of scores on outward nine of birdie at par three 5th, “blanks” at 6th & 8th followed once again with birdie at 9th, still counted a return of 20pts.

With the help of another birdie at 14th, Kevin’s total of 40pts was enough for him toclimb the podium steps by a winning margin of just one point.

Running that close second was single figure handicapper and a regular prizewinner of late, Clifford Malone [8] who, with the help of a birdie at 9th culminating in a front nine of 37 gross shots and 21pts, will no doubt reach that summit again soon.

Saturday 1st Nov. Open competition, sponsored by Audi Sligo, once again proved Barnhill as the most popular venue for golf at the moment. Despite other distractions at other courses, the large entry was shown the way home by Cat.4 handicapper Peter Mc Ginty [22] recent winner of the John J. Doherty Memorial Cup. Despite a card showing a treble bogey, double bogey and a “blank”, Peter’s intermitten nett pars’ gave him enough points to pip runner-up Edward Bradley [15] bt two points.

Despite a “blank” at 6th, Edward’s birdie at 11th gave him the impetus to a fighting finish of 40pts. Congratulations to club junior member Jack Patton [4] who returned the best gross of the day with 33 gross points.

Sunday 2nd Open, again graciously sponsored by Audi Sligo, proved the weekend to be a Cat 4 occasion, with John Bradley [28], taking the spoils. Despite a “blank” and a few double bogeys, John’s round of handicap golf showed everyone that if you play your own game, they have to better it. Coming a close second due to a front nine of 21pts, a birdie at par three 13th but losing out due to a “blank” at 18th, was local “trilby” stockist Lester Speer [17]. A satisfying return for Lester who has been out of action for a while with a broken wrist.

Congratulations to club member Finnian O’ Doherty [1] who, on his return to amateur status, took top gross prize at the North West Golf Alliance played at Narin/Portnoo on Sat. last. Also a mention of Jamie Foley who came second in that same competition.

On the social scene, Letterkenny Golf Club had a very busy weekend with the launch of their on-line Lotto and the visit of Audi Ireland, in conjunction with Audi Sligo, who chose Letterkenny Golf Club as their venue for the 2014 Audi “Future Now” Sales Event. Niall Connolly, MD of Audi Sligo, enthused about the venue and the reaction of the large turnout to view the Audi fleet of vehicles over both days, and hopes to bring the event to the club again in 2015.

The club’s new Lotto is proving a huge success already, with excitement and expectations high for the first draw which was made on Wednesday night past.

One lucky winner was guaranteed a jackpot of €1,000, while two Lotto members were in with a chance of winning €50 each in the “lucky dip”.

For those of you wishing to sign on to help your club’s future, access to the Lotto can be gained through our websitewww.letterkennygolfclub.com which will guide you how to play in some simple steps.

The first time you enter will require you to register your details, including name address and selected payment type. Thereafter the process is very simple. You will be kept well informed of winners, jackpot size and lucky dip prizes by text and email each week.