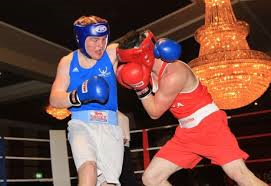 Brett McGinty was left ‘gutted’ following a controversial decision that resulted in his exit at the Junior European Championships.

McGinty was competing against Mladen Sobjeslavski and looked like he was in control of the bout early on.

The St Johnston based boxer looked classy and composed in the opening two rounds and seemed to have won both comfortably.

That sparked a reaction from his opponent Mladen Sobjeslavski and he upped the tempo in the final round.

Sobjeslavski might have shaded the last round as he had to chase it, as it looked as if he’d lost the first two rounds.

There was then shock and surprise when the referee raised the arm of the Croatian fighter Mladen Sobjeslavski.

McGinty looked visibly stunned as did the rest of his back-room team, there was further surprise when the judges scored the contest 3-0 in favour of Sobjeslavski.