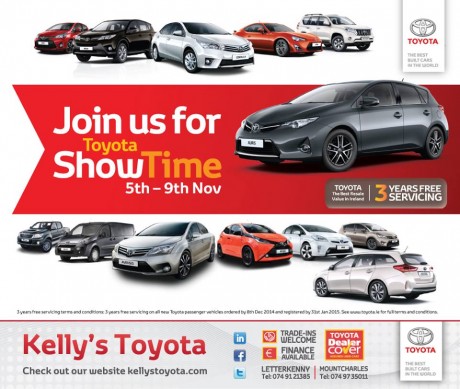 The ‘Showtime Promotion’ kicks-off today and lasts until Sunday, the 9th of November.

Kellys Toyota will be showcasing its full passenger and commercial model line-up for 2015, during its ‘Showtime promotion’.

With the newest model line-up of any car brand, highlights will include the 2015 Toyota Yaris as well as the exciting customisable and connected new AYGO.

As part of Toyota’s Showtime promotion, every Toyota passenger vehicle ordered before December 8th and registered before January 31st 2015 will come with 3 years’ free servicing.

Synonymous with superb quality, reliability, high levels of specification and exceptional value for money, Toyota has the best resale value in Ireland and was recently announced as the most popular car brand in Ireland, according to a Cartell report.

Call into our showrooms today, and have a look for yourselves, we’re open all weekend.