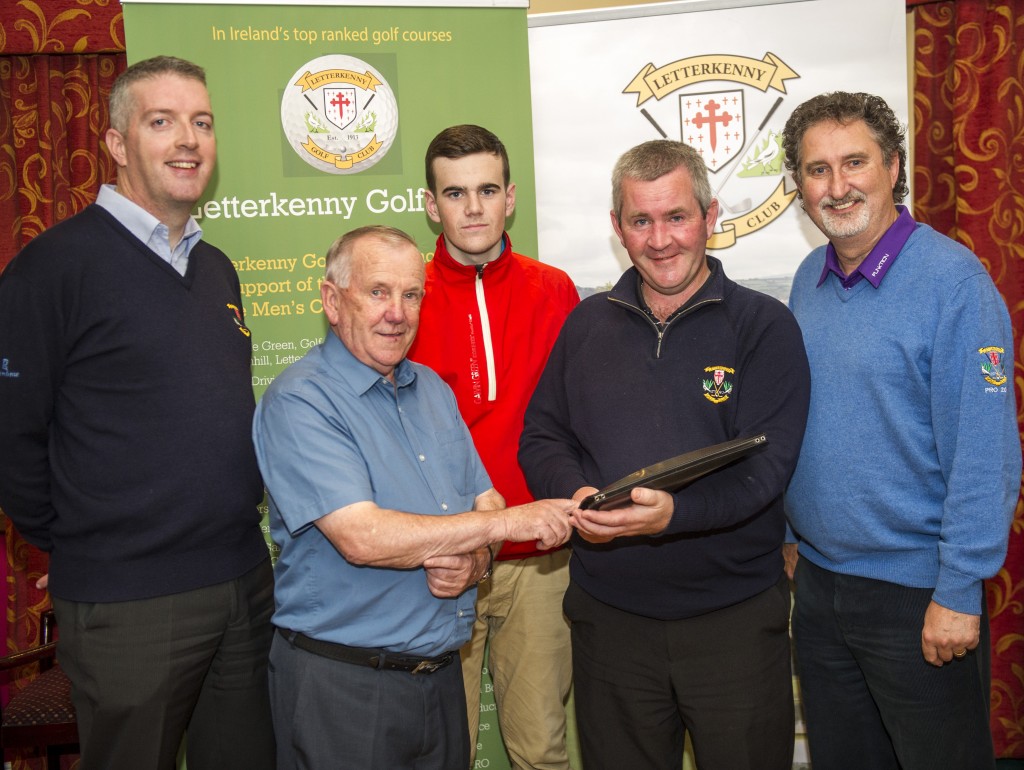 There must be a golf course in the clouds, which would attest to all the good golfing weather we are having of late, and it would be of no surprise to anyone if they were to hear

Kevin Rafferty singing “I do like Wednesday’s” to the tune of that made famous by Bob Geldof, for Kevin, playing off a single figure handicap of 8, won his second consecutive Wednesday prize at Barnhill with a runaway score of 43pts, six points ahead of his nearest rival!

With birdies at 5th & 7th on outward nine giving him a return of one over gross 37 shots and 21pts, Kevin’s only blemish on 15th was quickly erased with a birdie at par three 16th to give him an inward score of 36 shots [level par] and 22pts for an overall winning score of 43pts.

A great run of golfing scores from Kevin over the past six weeks which would bring him to a handicap of six.

In runner-up spot was another single handicapper and previous week’s winner, Martin A. Gallagher [6]. Martin’s back nine score of one under par for six holes from 9-14 inclusive of a birdie at 14th, was somewhat tarnished by a bouble bogey at 15th for a 37pt. finish.

Sat.8th Open was won by Cat 4 member Dermot Higgins[24]. Despite a “blank” at 3rd, Dermot managed a productive 21pts on front nine and secured the win with a comfortable 19pts on back nine for an overall 40pts.

In second place was Peter Muldoon [12] who, with a bad run of bogeys from 8th-11th and “blank” at 18th which probably cost him at least a B.O.T., still found enough reserve to return 20pts on back nine for an overall 38pts.

Sunday 9th confined competition was a matter of “strong wills” for the first three on the winners list and it was cat 2 member Michael O’ Donnell [12] who showed his will to win with a margin of two points.

With the best start of par-birdie, Michael had accumulated 23pts at the turn, one over par 37 gross shots, then almost blew his chances with a double bogey at 15th and bogey at 18th, only for some creditable scoring in-between to give him a winning score of 43pts.

Coming a close second, and great to see after a long spell in the wilderness, was single figure handicapper Roy Mc Crory [8], playing with renewed vigour since Michael came back home!

With an alarming double bogey at par five 2nd, Roy’s birdies at 14th and 18th, despite another bogey at 14th, gave him an inward nine of 23pts and a second spot score of 41pts.

Gross prize on the day was collected by Gerard Duffy [5], also finding a bit of form of late with 34 gross pts.

Letterkenny Golf Club’s newly launched Online Lotto’s first draw took place on Wednesday 5th and, although there would have been disappointment amongst the large crowd in attendance as their was no Jackpot winner, two lotto members who smiled happily were Maureen Duffy and Enda Mannion, winners of the “lucky dip” prizes of €50 each.

Congratulations to you both! The Lotto draw takes place every Wednesday evening, closing time for entries at 6pm Wednesday, and entry page can be found on club website, www.letterkennygolfclub.com and follow the prompts.