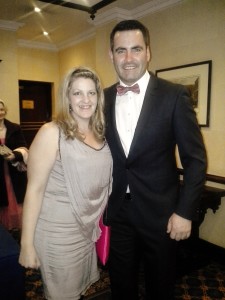 PAUL DURCAN: “IT’S STILL VERY RAW, AND I THINK IT WILL BE FOR A VERY LONG TIME”

Donegal goalkeeper Paul Durcan has revealed the pain of his individual error in the All-Ireland Final against Kerry is still as raw as ever.

Durcan, 32, was speaking candidly for the first time since his profile mistake in the All-Ireland Final.

Durcan is currently preparing to participate in the Great Ethiopian Run which will help raise money for Vincentian Lay Missionaries, which is headed by Donegal priest Michael McCullagh.

Durcan will be acting as ambassador and fundraiser for VLM on the day of the event.

The 2014 All-Star faces a 10km run through the streets of Addis Ababa, with the added challenge of the 2,300m altitude.

“We had a tough year of training with Donegal, so I’m not doing a whole lot,

“I’m not aiming for any special time, I’m just there to get it done and see some of the brilliant projects that father Michael is involved in.

“One of the projects is a new school for deaf children.

When asked about his uncharacteristic mistake in the All-Ireland Final in September, Durcan admitted it was still very, very raw and was his darkest day in football.

Durcan said, “It was my toughest day, I made a mistake that had a big bearing on the game.

“When you make a mistake as a goalkeeper it’s a goal, and it has a big effect on the outcome of the match.

“I’m trying to move on, fingers crossed I’m able to go back and do what I need to do for Donegal.

Some commentators have suggested that Durcan could’ve been dazzled by the sun, but Durcan moved swiftly to dispel that theory.

Durcan said, “No I wasn’t, I just kicked the ground before I kicked the ball, it was a miskick that was it.

“I knew what I wanted to do with the kick-out, but my boot hit the ground first.

“These things happen and I have to live with it.

Durcan revealed that he has since watched it back on TV, and although it was very tough to watch, it has helped him.

Durcan said, “It was tough to watch back on TV, but it has helped me strangely enough.

“The other boys were very supportive of me, I couldn’t say enough about them.

Durcan said getting an All-Star was nice recognition, but said it didn’t dilute the pain of missing out on a second All-Ireland medal.

“You’d swap the All-Star for an All-Ireland medal in a second.

“It’s nice to be recognized, but it doesn’t help with the memory of what happened.

Durcan revealed he spoke to Irish international Shay Given on the night of the match.

Durcan said, “He just said the same as everyone else, he told me I’ve got to move on and put it behind me.

Durcan is getting married later this year, and will then make a decision on whether or not he will return to the Donegal fold next season, but admitted the appointment of Rory Gallagher was an enticing one.

“We’ve got a very good manager in Rory Gallagher coming in, so it will be very hard to walk away.

Durcan also revealed he didn’t know Jim McGuinness had resigned until the next day, because his mobile phone was dead.

“My mobile was dead, so I didn’t get the text until the next morning.

“I texted him back the next day to thank him for everything he did, he made me a better and stronger player.