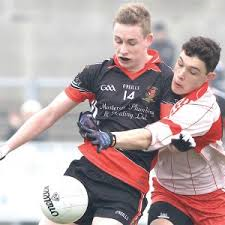 RESERVE CHAMPIONSHIP FINAL: HUME -” I BECAME DISILLUSIONED WITH SOCCER, AND FELL IN LOVE WITH GAELIC FOOTBALL”

Former Aberdeen FC youth player Sean Hume has said Gaelic Football has been the perfect replacement for him after becoming disillusioned with soccer.

Speaking to Donegal Daily ahead of St Eunan’s Senior Reserve Championship Final replay against Dungloe, Hume said that Gaelic Football provided the perfect platform for him after his experience in professional football turned sour.

Hume signed for Aberdeen but failed to settle at Pittodrie, and despite the efforts of then Aberdeen manager Craig Brown to convince him to stay Hume was homesick and decided to return home.

Peter Hutton snapped up the talented centre-half up for Finn Harps, and Hutton predicted a bright future in the game for the young Letterkenny teenager.

However, Hume had fallen out of love with soccer, and simply wasn’t enjoying his football.

“Now that’s not a reflection on the club, it was just me, I just wasn’t getting the same enjoyment from football as I had in the past.

“To sign professionally for Aberdeen was amazing, but I just couldn’t settle over there.

“When I returned to Harps, I was playing well, but as I said I just wasn’t enjoying my football.

Hume retuned to his studies following his return from Scotland, and it was playing Gaelic Football with St Eunan’s College that he fell in love with the game.

He’s been the star man for St Eunan’s Reserves all season, and his display in the final a fortnight ago was particularly eye-catching.

“I’m really enjoying it, I’m loving it, and I’m fully focused on Gaelic at the minute.

“We’ve had a great year, but we feel we left it behind us the last day, although we were mightily relieved to get a draw in the end up as we nearly lost it.

“We’re confident we can finish the job this weekend, but Dungloe are an excellent team and it’s going to be another very, very close and tough game.

Hume scored a number of superb frees in the drawn final a fortnight ago and his effort deep in stoppage-time secured a replay.

However, Hume says he relishes the responsibility associated with taking frees.

“I love that responsibility, I relish it, people were asking me was I nervous hitting that last free but strangely enough I wasn’t.

“I was hitting them well, and I felt confident, it could come down to frees at the weekend so hopefully I’ll be in good form again on Saturday.

Hume says for now he’s fully committed to Gaelic Football and hopes he can force his way into Maxi Curran’s senior plans at St Eunan’s.

Hume sat on the bench against Roslea, he wasn’t used though as management knew if he played he wouldn’t be able to feature for the Reserves this weekend.

However, with his free-taking expertise well documented he could be used in their Ulster SFC semi-final on Sunday.

“Look I’m only 18, I’ve plenty of years ahead of me to play senior, I’m just focused on finishing the job on Saturday.

“If I’m used on Sunday then great, but if not, I’ll just keep the head down and keep working hard.