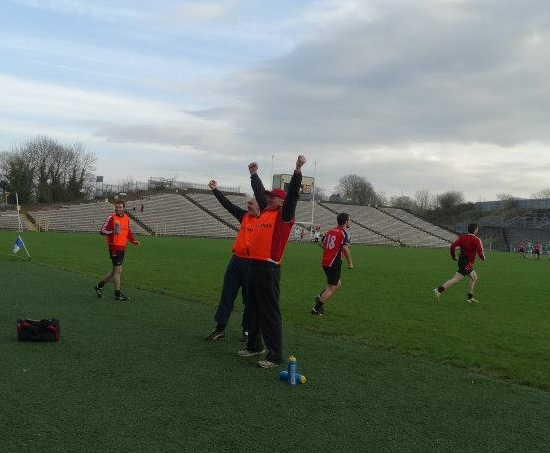 URRIS CLUB NEWS: ULSTER CLUB CHAMPIONSHIP SEMI-FINAL URRIS V KEADY IN CLONES: Massive congratulations to Danny Kelly and our senior men on reaching the Ulster Junior Club Football final after defeating Armagh champions Keady on Sunday in Clones. Urris booked their place in the final after beating Keady by 1-07 to 0-07.

The Armagh men put over the first two points before Eddie Kelly pointed. Sean Mc Daid was forced off early with an injury, replaced by Conor Bradley. Urris then drew level at two points each before Peter Devlin scored a crucial goal.

We then had Alan Friel black carded. Half time score was Urris 1-03 Keady 0-05. Keady scored the first two points of the second half and took the lead once more. The lads went on to score three points in a row and we were leading by two points with five minutes to go. Another point in injury time secured the win and the end of the match saw jubilant celebrations for players and supporters alike.

This victory was another proud day for the club and a great achievement on reaching an Ulster Club Final against Rock St. Patrick’s from Tyrone. Venue to be confirmed in next few days. The club wish to thank Danny Kelly and all the players for the massive effort being put in these past weeks and a big thanks to all our supporters for travelling in such big numbers to Clones. Urris Team: K Friel, S Mc Daid, D Devlin, G Doherty, M Grant (C), J Cooke, K Doherty, D Kelly, D Kelly, K Mc Laughlin, E Kelly, J Doherty, A Friel, P Devlin, M Mc Laughlin. Subs used: C Bradley, R Doherty, C Brennan.

CLUB MEETING: There will be a club meeting on Wednesday night at 8.00pm.

BUY A BLOCK PHASE 2: Due to a successful Clubhouse Opening and renewed interest the club has decided to run “Buy a Block “phase 2 until December 31. If interested, blocks can be purchased for €10. Funds raised will be used for further development of our clubhouse . Please contact John Friel, Rose Kelly or any committee member to buy a block.

SCOR NA OG: Well Done to all from the club who took part in Scor Na nOg in Muff on Friday night. Our dancers, musicians and solo singing. Our Ceili Dance team came first and are through to the Donegal County Final in Donegal Town on Sunday next, November 23rd. Best of luck in the final girls.

CLUB MERCHANDISE: Great selection of Club merchandise which can now be ordered , please contact Nichola Donaghey on 0866030736 or Donal Kelly on 0876461707 if interested. Check our Facebook page to view the club gear. Ideal for the Christmas presents, Christmas orders placed on November 20th.

DATE FOR THE DIARY: Club AGM on Sunday December 7th in the Clubhouse.