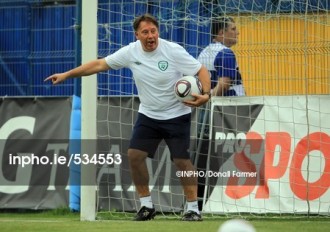 McIntyre is one of the most experienced goalkeepers this county has ever produced.

McIntyre enjoyed a distinguished playing career in the League of Ireland, and since he retired from playing has held a number of coaching positions with both Finn Harps FC and Derry City.

McIntyre was part of the back-room team at Derry City under Roddy Collins last season before Peter Hutton took over as manager after Collins was sacked.

McIntyre is expected to remain part of the set-up at the Brandywell for the forthcoming 2015 campaign.

McIntyre has also been heavily involved over the last 15 years or more with various Irish representative sides at all levels right up from u15 to u21.

His six-week ‘Goalkeeping Coaching Programme’ is specifically aimed at Schoolboy /Schoolgirl Goalkeepers over the coming weeks at two venues in Donegal.

It starts tonight 19th November on the astro-turf at Bonagee United from 7.30 – 9 pm.

Wednesday nights will be primarily aimed at the 12-16 year old keepers in the county.

Each session will last for 90 minutes so the GK’s will get plenty of work and coaching time.

The Programme at Bonagee will run every Wednesday and Thursday night up until the 17 and 18th of December 2014.

Similarly on Sunday 23th November The Goalkeeping Programme will start in The Hospital Field Donegal Town with a 10.15 am start for the 8, 9, 10 and 11 year-olds.

The programme is a great opportunity for young GK’s to get some much needed coaching from an experienced and qualified goalkeeping expert.

The programme is open to everyone boys and girls and they’ve had a number of outstanding female keepers attend the courses over the last few years.

Or if you contact Declan via e-mail at declanmcintyre2000@eircom.net