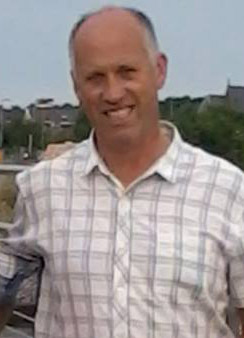 Huge crowds are expected to attend the funerals of life-long pals Seamus Hegarty and Kevin Woods who died in tragic circumstances on Friday last.

Devoted family man Seamus Hegarty who was tragically killed when a tractor tyre blew out.

The two farmers, both aged 52, died when a tractor wheel exploded while they were changing it beside a field at Crossroads, Killygordon.

The men, who had attended school before working together, regularly helped eachother out.

Local priest Fr Edward Kilpatrick said the local community was finding it difficult to come to terms with such a tragic loss of life.

Massive crowds have been attending the men’s wakes – a testament to the high regard in which they were held in their community.

Both men have been described by all who knew them as ‘decent, hard-working, modest human beings.”

Mr Hegarty, a married father-of-four, will be buried after 11am funeral mass at St Patrick’s Church in Murlog, Lifford today.

And his close friend Kevin Woods, a single man, will be buried tomorrow at the Old Cemetery, Convoy, following 11am funeral mass in St Patrick’s Church in Murlog, Lifford.

The scene of the double tragedy which claimed the lives of the two farmers. Pic by Northwest News Pics.