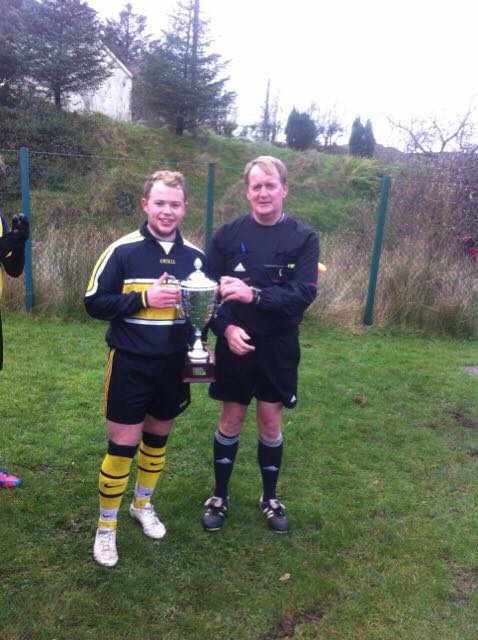 Rosses Community School U17 side ran out emphatic winners in their Donegal School Boys League Cup Final against Royal and Prior Comprehensive at Pairc Acla, Fintown.

The match was played on a cold dry day in Fintown with a stiff breeze blowing down the pitch.

Royal and Prior won the toss and opted to play with the wind in the first half.

Both teams had their share of possession but neither team really created a clear cut chance in the opening quarter.

RCS striker Christy Greene got in behind the Royal and Prior defence and finished well to the net.

Royal and Prior responded well and put some pressure on the RCS defence.

However, RCS then broke quickly and Christy Greene finished again to the bottom right hand corner of the net.

Royal and Prior continued to threaten and their two strikers were very lively up front.

However, just before half-time Christy Greene completed his hat-trick when he rounded the goalkeeper and finished into the empty net.

Half-time score-line was Royal and Prior 0 RCS 3.

However, RCS managed to withstand the onslaught with Declan Ward looking very assured in the RCS goal.

Eventually they managed to break forward and Christy Greene was brought down in the penalty area.

Daniel Ward stepped up and hit it low and hard to the goalkeeper’s right hand side making it 4-0 to RCS.

Royal and Prior continued to push forward and created a few chances which could have led them back into the game.

Rosses scored their fifth through substitute Mark Curran after he found himself one-on-one with the goalkeeper and slid the ball into the corner of the net.

The final goal came towards the end of the match with RCS defender Seamus Grant scoring a free-kick from just outside Royal and Prior’s penalty area after a great run from Daniel Ward.

Credit to Royal and Prior’s character as they kept pressing RCS until the final whistle.

The Philip Diggins Memorial Cup was presented to RCS captain Aiden Gillespie after the match by referee Marty Quinn.

RCS performed very well on the day with all members of the panel contributing.

Royal and Prior showed great character to keep challenging right until the end.

The match was played in the correct manner and both sets of players displayed a very positive attitude.

RCS manager Daniel Doherty was delighted with his side’s attitude and application throughout the game and said they fully deserved the victory.

Both teams now advance to the Quarter Finals of the Ulster School Boys Cup.