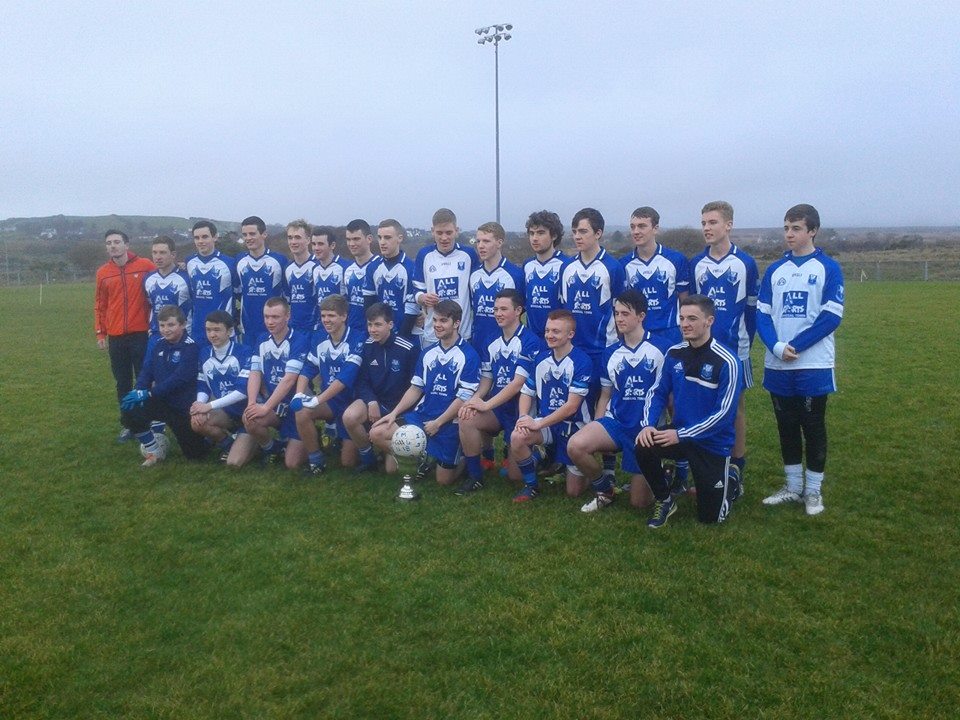 The Four Masters Minor football team recorded a 1-16 to 2-06 win against St Nauls on Sunday morning, 30th November in the Southern Division 2 Final.

The Four Masters boys dominated possession and chances for long spells but failed to take numerous goal and point chances they created.

Both teams started with thirteen players due to St Nauls missing players. A good opening to the game saw Jack Keaney, Thomas McGowan, Darren Doherty, and Sean Meehan all register points; with Paddy Reid hitting the crossbar with a great effort before St Nauls replied. Two frees from St Nauls (one excellent long range free kick from goalkeeper Gavin Mulreanny) narrowed the difference before points from Jack Keaney, Paddy Reid, Nathan Ward and Thomas McGowan brought the score to 0-07 to 0–03 on the half hour. An excellent low finish from Thomas McGowan just before the half time whistle gave the lads a deserved 1-07 to 0-03 at half time.

A good start to the second half saw Four Masters extend the lead with two quick Sean Meehan points. An excellent save from Gavin Mulreanny on a Jack Keaney shot kept St Nauls in the game. Two points from the excellent Brendan McCole brought St Nauls back into the game. Points from Darren Doherty, Paddy Reid and Nathan Ward (free kick) followed before St Nauls started to fight back with Peadar Mogan at centre half forward coming to the fore. A debatable penalty for St Nauls for a pick up of the ground was awarded with just over ten minutes left. Peadar Mogan finished the penalty clinically to bottom left hand corner past Ryan Haughey which left the scoreline 1-12 to 1-05. Nathan Ward replied instantly for Four Masters before a close in Peadar Mogan free kick. Good points from Nathan Ward (two points; one excellent score with his right foot) and Jack Keaney wrapped the game up. A last minute penalty for a Ryan Haughey footblock saw Peadar Mogan narrow the gap; with the game ending 1-16 to 2-06 to Four Masters.

Overall, the game was played in a very sporting manner with some excellent scores on the day. The best performers for Four Masters on the day were Jack Keaney, Gareth Cleary, Ryan Haughey, Calvin McShane, and Dylan Kennedy; with Sean Meehan and Nathan Ward coming to the fore in the second half. Peadar Mogan and Brendan McCole were excellent throughout for St Nauls, with their being an excellent duel between Daire Quinn and Mogan over the sixty minutes. Four Masters, despite winning will need to be more clinical with over six excellent goal chances spurned during the game. Four Masters play Buncrana next, with St Nauls playing Termon in the county semi finals. Best of luck to both teams.