Workers at the Mevagh Boatyard who will be featured on RnaG

Listeners across Donegal have plenty of great reasons to tune in to RTÉ Raidió na Gaeltachta over Christmas with a wide range of special programmes being broadcast. Barrscéalta will broadcast their Christmas show live from Siopa Mhicí in Gaoth Dobhair on 11 December, and Rónán Mac Aodha Bhuí will have his Rónán Beo @3 wrap party in the Gweedore Bar on 19 December at 3 pm. 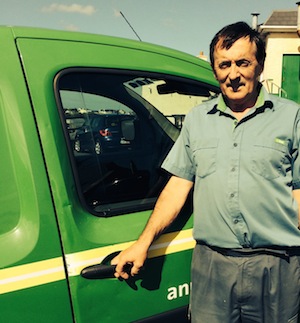 As is Christmas tradition, an tAthair Brian Ó Fearraigh of #priestselfie fame, presents an atmospheric programme on Christmas morning, Réalta Órga Ríogacha, at 10 am with music, hymns, and Christmas thoughts. As Scoil Gheimhridh Ghaoth Dobhair gears up for its first year, RnaG will bring us the best of the final Scoil Gheimhridh Frankie Kennedy, with music from Maighréad and Tríona Ní Dhomhnaill with Dáithí Sproule, Altan, Fidil, Máire Ní Bhraonáin, and more, on Christmas day at 6.30 pm. On 29 December Séamus Mac Géidigh will present a programme about Bád Chlós Mhíobhaigh, the Mevagh Boatyard, built by the Congest Districts Board and opened in 1910. We will hear from some of those who worked there about its importance for the area, and for the fishing industry in the county. On 30 December at 11 am, we will hear a special programme about Donegal and the First World War. It is estimated that up to 5,000 people from Donegal fought in the First World War, and 674 of them were killed. In this programme, historians Dr Seosamh Ó Ceallaigh and Niall Mac Fhionnghaile, will share their knowledge on the subject with us, in particular the story of Canon Mac Giolla Chearra, a chaplain in the war who was later Parish Priest in Gort an Choirce. Listeners will get a second chance to hear programmes from the series An Lá seo Romham over Christmas, presented by Dónall Mac Ruairí, where he spends a day with people working in different areas to learn about their lives. The programmes will be broadcast at 1.30 pm from 29 December to 2 January, and will include programmes with Muiris Conchubhair Beag Ó Gallchóir, a member of the fire service in Gaoth Dobhair, lorry driver Liam Mac Aoidh, an eventful night out with taxi man Charlie Mac Mac Pháidín, and a day doing the rounds with Pádraig Mac Eamharcaigh, postman for Gaoth Dobhair. Áine Ní Churráin will bring us a special programme about Coláiste Loch Súilí in Glenvar on 30 December at 2 pm. Tune in on 31 December at 11 am, when Fr. Seán Ó Gallchóir will discuss the tenure of Jim McGuinness as Donegal football manager, and what the future holds under the stewardship of Rory Gallagher. For a full list of Christmas programme highlights, see www.rte.ie/rnag