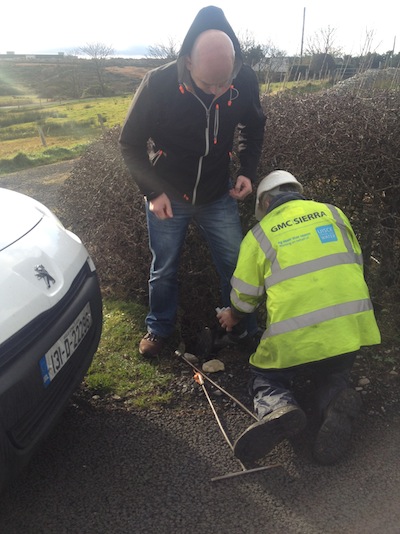 A Donegal county councillor has literally “take a stand” against the water charges.

Cllr Mac Giolla Easbuig stands on a water meter as it is installed today.

An official complaint has been made to the local Gardai about the incident.

However, Cllr Mac Giolla Easbuig said he will continue to stop the workers from putting in the water meters.

Cllr Mac Giolla Easbuig said he is now encouraging anyone who sees water meter installers in their area to block them from installing the devices.

“I would be in favour of anyone taking a stand and stopping these meters from being installed.

“If they cannot stand over them then they can drive their cars over them to stop these meters form being installed,” he said.

Cllr Mac Giolla Easbuig also reiterated his call to Deputy Charlie McConalogue to debate the issue with him.