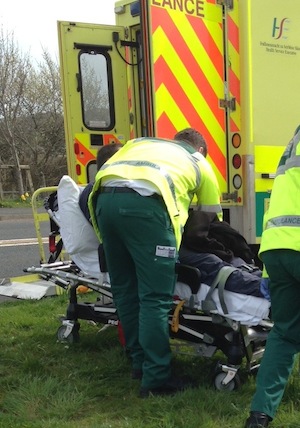 EXCLUSIVE: Two Donegal Gardai have been found to be in breach of discipline after they drove past a man after he collapsed suffering from a suspected heart attack.

Seamus Duffy is taken into an ambulance after his suspected heart attack back in April.

Seamus Duffy collapsed complaining of chest pains after being stopped by Gardai in Ballybofey on April 7th last.

Mr Duffy, 50, was stopped by Gardai at a traffic checkpoint where it was found his car tax was out of date by two months.

After an encounter with Gardai in which he pleaded for a chance, he refused to get out of the car.

The car, with Mr Duffy’s medication inside, was eventually seized by Gardai.

A few minutes later Mr Duffy collapsed to the ground clutching his chest.

Passers-by called and ambulance and Mr Duffy, who has a heart condition and is attending Galway University Hospital, was taken to hospital.

Mr Duffy, from Railway Road in Killygordon, complained to the Garda Ombudsman Commission about the incident.

In his letter to GSOC, Mr Duffy claimed that one of the Garda even threatened to pepper-spray him.

“I got out of the car and I informed them that I was still feeling unwell, but (one of the Gardai) replied “so what.” I told them I was unable to walk due to feeling unwell, then I was told to get a taxi. They took possession of my car. I collapsed onto the grass as I was not well and as I was lying on the grass they drove past me. They didn’t care if I died. If it was not for the witnesses there I would not have got help,” claimed Mr Duffy in his letter to the Garda ombudsman.

On May 24th last the Garda Ombudsman decided that two aspects of Mr Duffy’s complaint were to be investigated.

They included that he had been verbally abused by one of the Gardai.

It also ordered that an investigation be carried out into his claim that Gardai drove past him after he had collapsed and was lying on the ground and did not seek any assistance for him.

On November 18th last, Donegal’s Garda Chief Superintendent Terry McGinn wrote to Mr Duffy informing him that both Gardai had been found to be in breach of discipline.

The investigation file was then referred back to the Garda Ombudsman.

The Ombudsman then wrote to Mr Duffy again on November 28th last informing him that both Gardai had been found to be in breach of discipline.

The case officer, Helen McCann, said the investigation had been concluded that both “were found to be in breach of the Garda Siochana (Discipline) Regulations 2007 in relation to neglect of duty and were dealt with by way of Advice.”

Mr Duffy was told that if he was not satisfied that he may request GSOC to review the matter.

He was then informed he had until December 12th to request a review of the case.

Donegal County Councillor, Frank McBrearty, who acted on behalf of Mr Duffy, during correspondence with GSOC and interviews investigating officer Supt Archbold, told Donegal Daily they will be seeking a review of the matter.

Cllr McBrearty said “Seamus Duffy admits that his car tax was out by two months.

“However the manner in which he was treated by these Gardai was completely unsatisfactory.

“This man suffers from a heart condition and for Gardai to refuse him his medication and then to drive away from him is a clear dereliction of their duty.

“Gardai cannot be seen to be above the law and for what these Gardai did on this day they must be held accountable.

“The Gardai are there to serve and protect the citizens of this country. They did not do this for Seamus Duffy on this day,” he said.

It has now come to light that Mr Duffy has been charged with not having tax for his vehicle but also obstructing Gardai on the date he was stopped and suffered a heart attack.

GARDAI DISCIPLINED AFTER LEAVING MAN AT SIDE OF ROAD SUFFERING SUSPECTED HEART-ATTACK was last modified: December 8th, 2014 by Stephen Maguire