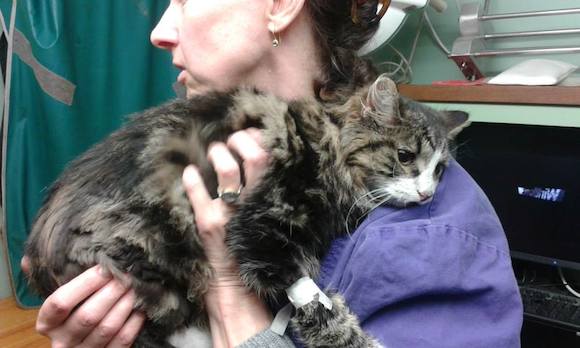 SICKENING! KITTEN SUFFERS HORRIFIC BURNS AFTER BEING CHUCKED ONTO FIRE

The injured kitten had plastic melted into his paws – DD

IT’S the sickest and most appalling attack on a defenceless animal in some time – someone tried to burn this five-month-old kitten by chucking him into a fire.

Animal rights campaigners say they have been left sickened by the incident in Burtonport.

“We received a call on Saturday evening about a cat that was found in the middle of Quay Road that was very scared and shocked,” said a spokesperson for Burtonport Animal Rescue.

“We went to collect the cat from the kind man who took him in and kept him safe secure but nothing could’ve prepared us for what we saw.

“The poor cat who turns out to be about a 5 month old kitten. Someone had seen fit to throw it on a fire and it had molten plastic stuck to his fur….. the pads on his feet peeled off leaving his feet raw.

“He also lost a claw and has infected toes. His whiskers have been burnt off one side of his face. He had to be sedated to be assessed and has been on a drip and pain medication since Saturday night.

“He was sedated on Sunday again to try and clean him up and have some patches of his fur clipped. He also has breathing problems which the vet is hoping will not turn to pneumonia. The vet said she has never seen a cat in this condition and the cat would not of jumped on to the fire himself.”

The kitten is a greyish brown long haired kitten with a little bit of white on it. If anyone has any information about this kitten we would really appreciate it you can contact Burtonport Animal Rescue on 0860762228 / 0864038888 or the Donegal ISPCA on 0866054943 or Gardai.

The injured paw….the kitten is fighting for his life